Puhl, Bigelow and colleagues investigated the neural mechanisms that enable the medicinal leech to crawl again after descending cephalic inputs have been permanently destroyed by ventral nerve cord transection. The European medicinal leech, Hirudo verbana, is a good model for studies of locomotor circuitry because of its numerically simple and accessible nervous system, segmental organization, and both terrestrial and aquatic locomotor behaviors, crawling and swimming, respectively. During crawling, an anterior-to-posterior wave of segmental elongations first initiates a forward motion. Then, an anterior-to-posterior wave of segmental contractions completes the movement forward. These alternating series of elongations and contractions are accompanied by placement of anterior and posterior suckers providing leverage for moving on a substrate. A prior study from Professor Karen Mesce’s laboratory (University of Minnesota, MN) showed that the restoration of crawling behavior took days or weeks, and initially lacked proper segmental coordination. In their eNeuro publication, Puhl, Bigelow and colleagues investigated how crawling behavior is restored in the absence of descending cephalic input.

The nervous system of H. verbana consists of a dorsal-anterior compound cephalic ganglion (the brain), and a nerve cord composed of 21 ventrally-located ganglia (M1-M21; one per segment), which are linked by neuronal fibers called connectives. The ganglion located closest to the site of connective transection is designated the “lead” ganglion. Puhl, Bigelow and colleagues found that activation of isolated lead ganglia by dopamine exposure was able to activate some crawl-like activity in adjacent ganglia, but could not account for the anterior-to-posterior wave of segmental coordination required to mimic crawling behavior in injured leeches. As activation of CNS neural circuitry was not sufficient for locomotor recovery, Puhl, Bigelow and colleagues examined whether sensory input from the peripheral nervous system could provide the cues needed to permit the intersegmental coordination vital for productive locomotor activity.

Elimination of sensory information to the lead ganglion M3, by M3 denervation and a transection between M2/M3, lead to a recovery of crawling in approximately 55% of cases. As all leeches that received a M2/M3 transection with no nerve root denervation recovered crawling behavior, these results indicate that prevention of afferent nerve regrowth into the lead ganglion negatively impacted the recovery of crawling. To test for anatomical evidence for this observation and to understand better why some animals recovered their crawling behavior and others did not, Puhl, Bigelow and colleagues backfilled (with Neurobiotin tracer) M3’s peripheral nerves distal to the original nerve cut. Figure 1 shows the Neurobiotin labeling of neuronal fibers in the M3-denervated preparations (M2/M3 transected) obtained from leeches that recovered or did not recover coordinated crawling behavior. In the recovered group, Neurobiotin labeling was observed within the M3 ganglion, showing that regrowth of peripheral inputs to their M3 original target had occurred. Conversely, regrowth into the M3 ganglion was not established in leeches that did not recover crawling behavior.

This compelling finding is a significant advance in the field as it shows that motor coordination switches from a dependence on the CNS to that of sensory inputs and is responsible for the recovery of locomotor behavior in the leech. These observations highlight the flexibility of neuronal circuity and the importance of homeostatic plasticity in neuronal networks after injury. To what extent the central and peripheral nervous systems are capable of reciprocally compensating for each other is an important question for further studies of neural injury in various model systems. 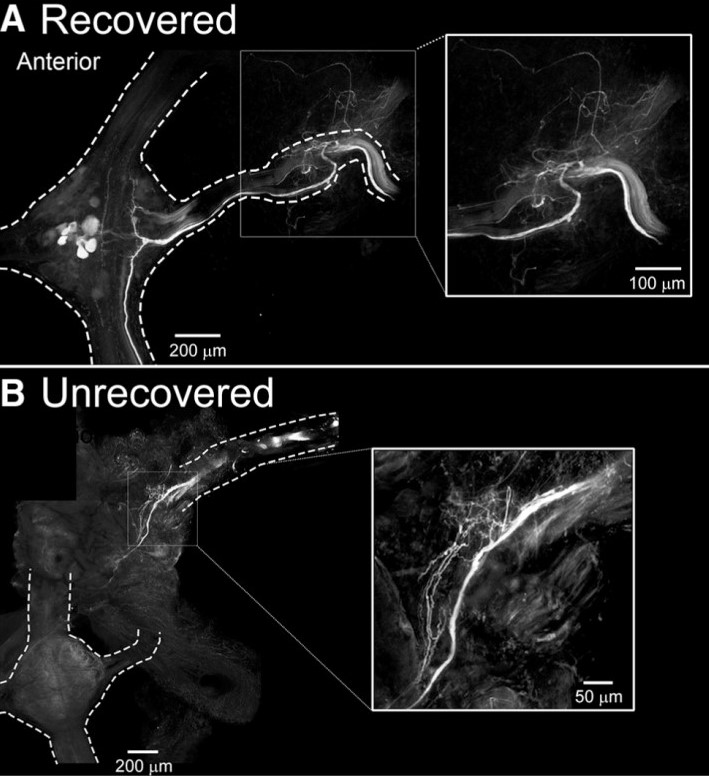