This article in eNeuro describes an unexpected effect of in utero electroporation (IUE) of plasmid DNA on the distribution of microglia within the developing forebrain. Hattori and Miyata initially performed IUE to detect simultaneously neural lineage cells and microglia, the latter marked by CX3CR1-GFP transgene expression. However, they discovered an unexpected, intramural distribution of CX3CR1-GFP+ microglia, most notably within the luminal wall. Overall, these findings are highly significant and will be of great interest to developmental neurobiologists. This research is timely because IUE is a widely used approach to manipulate gene expression in embryonic brain cells.

By examining individual components of the IUE process, Hattori and Miyata determined that the presence of exogenously sourced plasmid DNA was responsible for the altered distribution of resident microglia (Figure 1). Glass capillary needle puncture or application of electrical pulses did not alter the distribution of microglia. 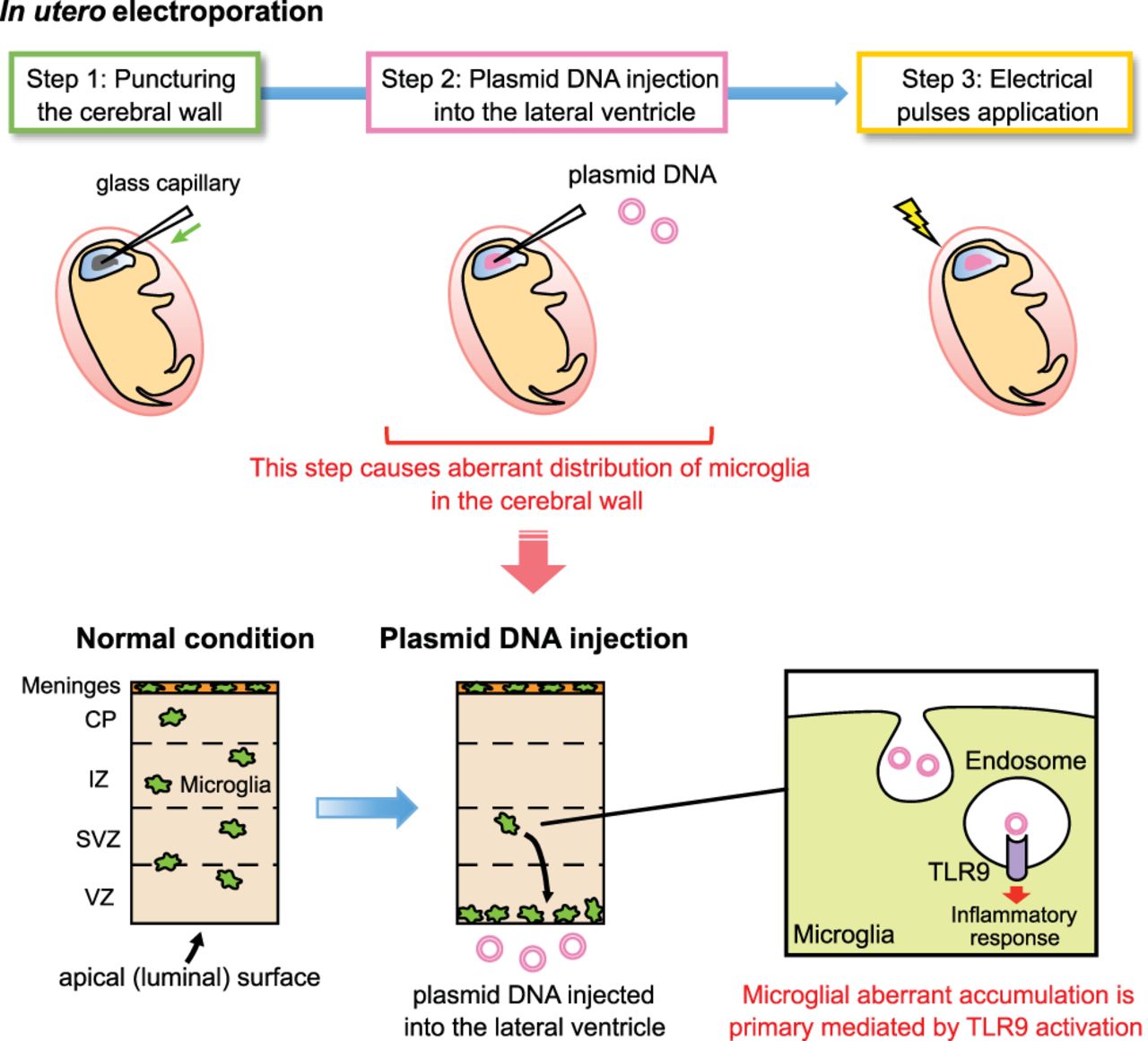 Figure 1. Schematic illustration of findings. Schematic illustration showing the mechanism underlying the aberrant distribution of microglia in the cerebral wall of IUE-performed brain. The presence of exogenously derived plasmid DNAs induced microglia to accumulate along the apical surface of the cerebral wall and aggregate in the choroid plexus. This effect was independent of capillary needle puncture of the brain wall, or application of electrical pulses. The microglial response is mediated by activation of TLR9, which is expressed intracellularly in microglia. (Figure 8 in Hattori and Miyata, 2018.)

Next, Hattori and Miyata performed a titration study to find a threshold of plasmid DNA which triggers intramural microglial positioning within the embryonic neocortex, and dose-dependent accumulation of microglia within the choroid plexus. Importantly, the concentration of plasmid DNA required to induce the microglial response is lower than that typically used in IUE.

Toll-like receptor 9 (TLR9), an innate immune sensor that recognizes unmethylated cytosine-phosphate guanosine motifs in microbial DNA, is highly enriched in CX3CR1-GFP-expressing microglia of the embryonic pallium. Hattori and Miyata observed that the intramural changes in microglial distribution upon plasmid electroporation are significantly impeded by blockade of TLR9 by application of the oligonucleotide ODN2088 (Figure 1). This is an important finding, as a recent study reported infiltrating macrophages as the source of microglia following electroporation. Indeed, Hattori and Miyata are pragmatic to conclude that they cannot rule out the possibility that infiltrating macrophages may also explain their observation. The influence of IUE on the resident as well as infiltrating microglia of the embryonic neocortex remains to be better understood. Hattori and Miyata’s eNeuro publication advances the field with regards to IUE, an important and widely used method of gene delivery for the study of embryonic cortical cells during fetal development.

As the Reviewing Editor for this publication, I would like to acknowledge the reviewers’ helpful input through the consultation review process. The synthesis and the authors’ response to our review can be found in the Synthesis section at the end of the eNeuro publication.