Editor's Pick: An Upside to Inhibition

The hippocampal inhibitory network is diverse, with classes of interneurons defined by gene expression, anatomy and physiology thought to play specific roles in shaping excitability and circuit function. Despite this complexity, genetic approaches in the mouse now allow exquisite precision in targeting manipulations to specific cells types. In their recent eNeuro publication, Whissell, Bang and colleagues further raised the bar in the field. They employed an intersectional approach to overlay the expression patterns of two transgenes and restrict the expression of the excitatory DREADD (Designer Receptors Exclusively Activated by Designer Drugs) receptor specifically to cholecystokinin-expressing GABAergic (CCK-GABA) neurons in the mouse forebrain. After confirming their targeting, both anatomically and functionally, they assessed the behavioral impact of the activation of CCK GABA neurons. Previous work had implicated this subclass of neurons in emotional- and anxiety-related behaviors. However, the authors observed little change in tests sensitive to anxiety or depression. Instead, they observed an enhancement of cognitive function across several diverse tasks, including contextual fear conditioning, context discrimination, social memory, novel object recognition, and a problem-solving puzzle box test (Figure 1). This consistent pattern of results suggests that this boost in a specific type of inhibition can generally improve cognition. The authors speculate this may be due to improvements in the signal-to-noise ratio at the network level, generating some interesting hypotheses that can be tested in the future using physiological or optical methods to monitor network activity. Given that CCK-GABA neurons are implicated in psychiatric disorders such as schizophrenia, the findings of this eNeuro publication by Whissell, Bang and colleagues could be highly relevant for future drug development. 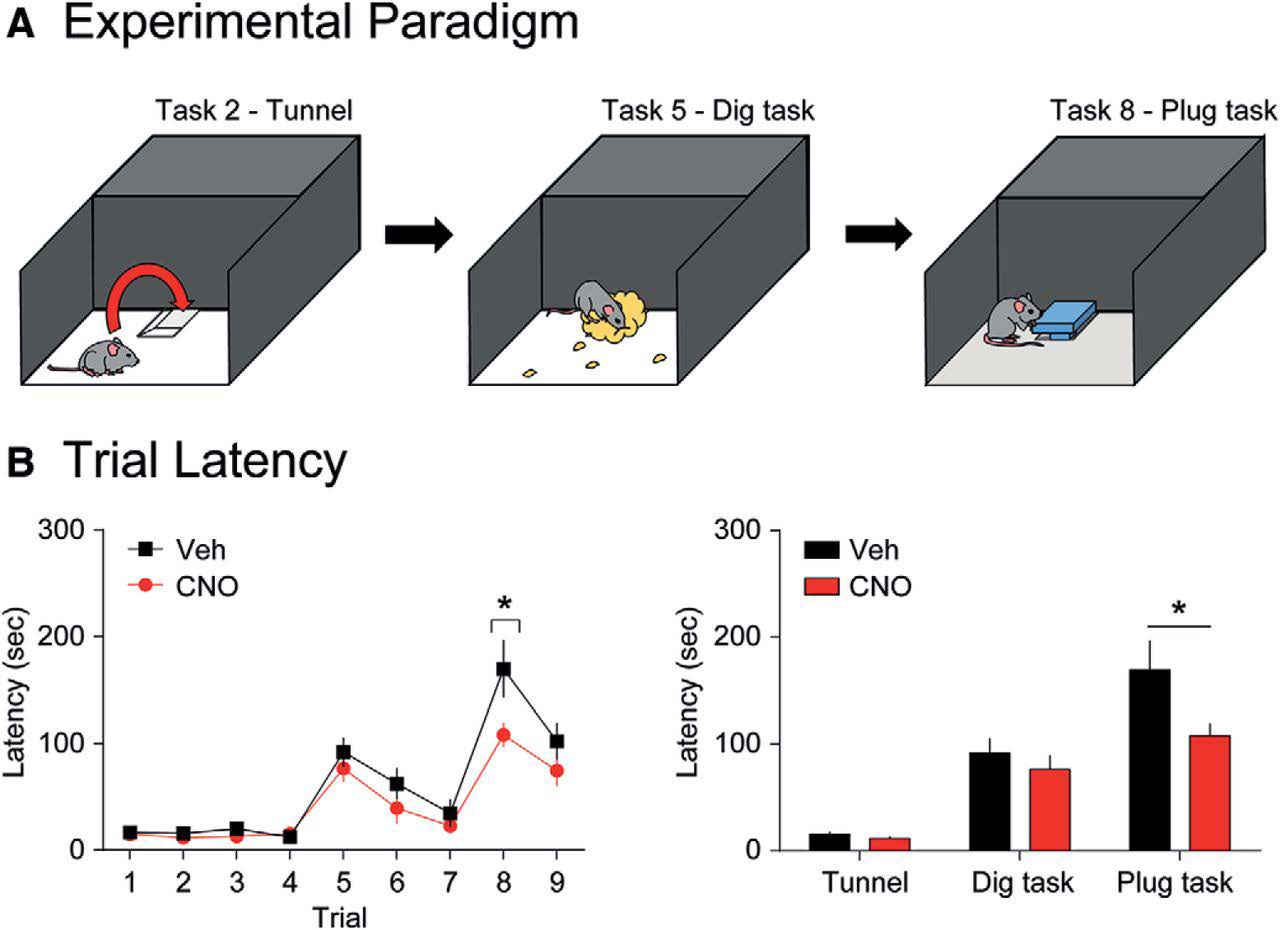 Figure 1. Selective activation of CCK-GABA neurons enhances performance in the puzzle box test. (A) Cartoon of the two-chambered puzzle box that contained obstacles that hindered access from the start area to the goal area of the box. In the nine trials, there was unrestricted access, or the mouse had to acquire a new strategy to escape to the goal area, such as passing through a tunnel (Task 2), digging through bedding (Task 5), or moving a cardboard plug (Task 8). (B, left) Escape latency of mice in which CCK-GABA neurons were activated (CNO) or vehicle (Veh) control mice in all nine trials of the puzzle box test. Lower escape latencies indicate better performance. CNO-treated mice show significantly lower escape latency only in trial 8 (plug task). (B, right) Escape latencies for CNO-treated and Veh-treated mice in all novel obstacle trials (tunnel, dig, and plug task). All figures present data as mean ± SEM. Asterisk indicates statistical significance. (Figure 5 in Whissell et al. 2019.)