Beyond the Paper: A Conversation with PhD Candidate Ruilong Hu and Dr. Ricardo Araneda

Hyperpolarization-activated cyclic nucleotide-gated (HCN) channels play an essential role in neuronal function and network oscillatory dynamics, including the control of membrane excitability and integration of synaptic inputs, the generation of membrane potential oscillations, and subthreshold resonance of neurons. The voltage sensitivity and kinetic properties of the hyperpolarization-activated current (Ih), is dependent on the subunit composition of the channels (HCN1–HCN4), providing a rich heterogeneity to the contribution of these channels to network function. In their eNeuro publication, Hu et al., 2016 examined Ih in granule cells, the predominant type of inhibitory neuron in the olfactory bulb. The authors showed that granule cells exhibit an Ih-dependent subthreshold resonance in the theta frequency range (4–12 Hz). Notably, Ih size and the strength of subthreshold resonance in granule cells exhibited a postnatal developmental progression, suggesting that the development of Ih in granule cells may differentially contribute to their integration of sensory input and contribution to oscillatory circuit dynamics. 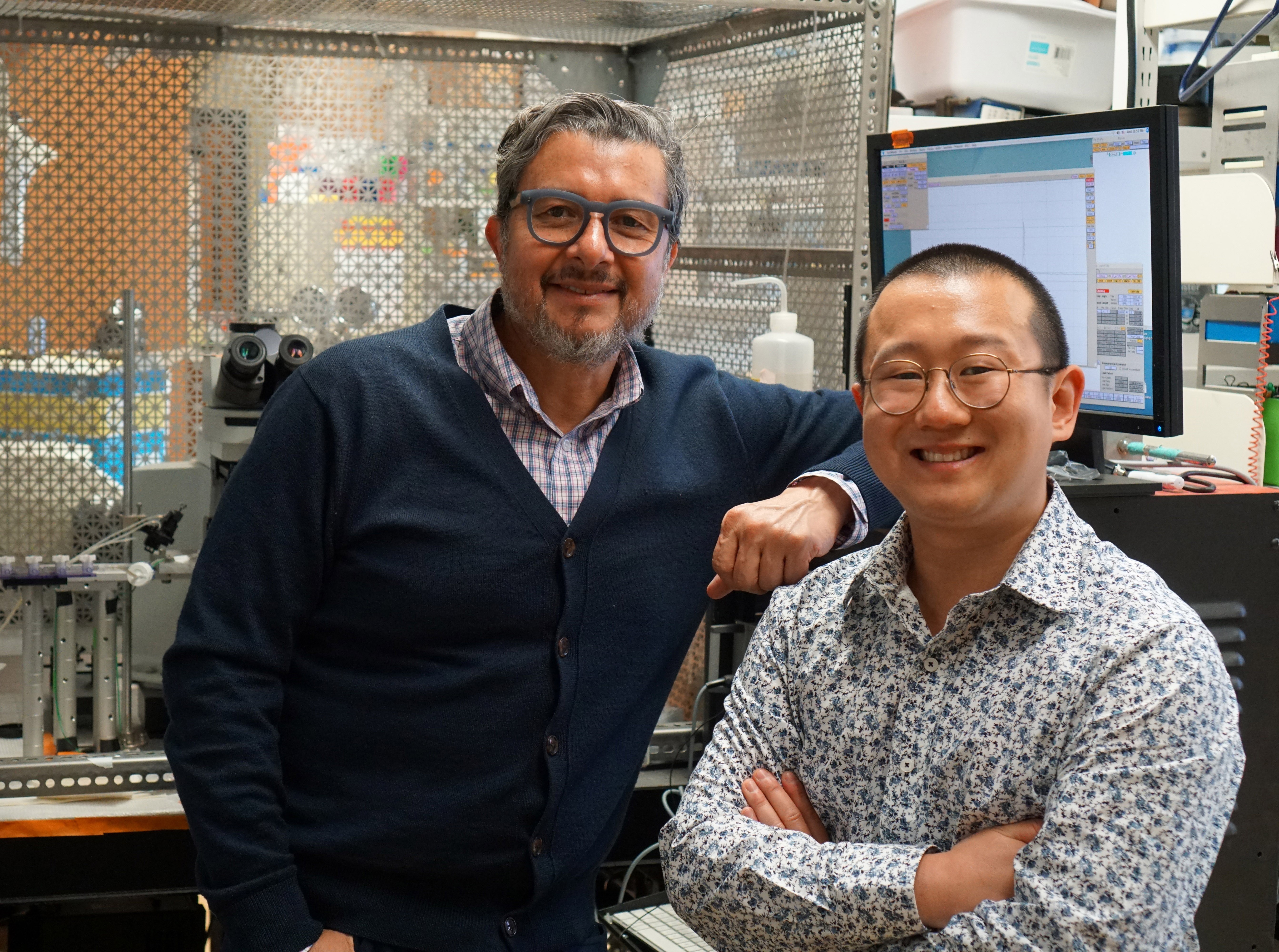 How did you become interested in this particular line of research?
Ricardo: “My long-term research goal is to understand how neuromodulatory transmitters such as noradrenaline and acetylcholine regulate neuronal activity in the brain. We frequently use targeted expression of optogenetic and chemogenetic tools to precisely control the activity of neuromodulatory neurons that regulate the olfactory bulb circuit. From these manipulations, we can learn how different types of cellular regulation can influence odor-guided behaviors. But this eNeuro paper started with something very different, which I will ask Ruilong to explain.”

Ruilong: “When I was doing my rotation in the Araneda lab, I was studying neuromodulation by acetylcholine in the olfactory bulb and cortex and doing behavioral experiments. At the start of my PhD, I was fortunate that Ricardo invited me to be a teaching assistant at the Neurobiology: Mechanisms & Advanced Approaches course at the Marine Biological Laboratory at Woods Hole, MA. We taught the course participants how to do electrophysiology experiments – one particular group included Dr. Katie Ferguson, Dr. Christina Whiteus, and Dr. Dimphna Meijer, who are coauthors on this eNeuro paper. I think Ricardo came up with the initial idea to examine Ih in granule cells as it had already been characterized in mitral cells, the principal cells of the olfactory bulb, but not in granule cells. So, we started doing experiments looking at Ih in granule cells. Then Katie, a computational neuroscientist, mentioned how currents such as Ih can contribute to intrinsic oscillatory properties in cells. She suggested using a chirp protocol, in which a sinusoidal current of constant amplitude and increasing frequency is passed into the cell. The profile of the voltage response allows you to see whether the cell has electrical resonance. Neither Ricardo nor I had used a chirp protocol before, but that interaction at Woods Hole led to the start of this eNeuro paper.”

Ricardo: “Yes, this was not a protocol we had used before, but we applied it during seven days of intense experiments at Woods Hole. It was probably one of the best small projects that students of the course have worked at our teaching rig. When we came back to the lab, this study became Rui’s main project and the first part of his thesis. To develop a more well-rounded story, Rui also performed electroporation to label the cells at different developmental times for subsequent postnatal recordings and examined inward currents in the presence of a selective Ih blocker. Ultimately, this project became Rui’s first paper as a first author.”

Why is this eNeuro paper an important contribution to the field?
Ruilong: “After we came back from Woods Hole, I learned to write MatLab code to analyze the data. When I looked more closely at my data, I realized that not all of the cells we were recording were resonant; some cells had a little Ih and had little resonance, but some cells were much more resonant. We thought this could be related to age. This is not discussed heavily in the paper, but we did find an age-dependent difference in the size of the Ih current and resonance of the granule cells. This represents a change in intrinsic excitability and physiological function in these cells as a function of age. Also, a difference in electrical resonance means the cells may filter certain frequencies differently and alter how they integrate synaptic information. Neurogenesis studies in the hippocampus and olfactory bulb have recently shown that young cells are already communicating and actively participating with other cells in a circuit. In our eNeuro paper, we also suggested that young and old cells have different roles in olfactory bulb neuronal circuitry.”

How would you describe the mentoring philosophies in the lab?
Ricardo: “When I did my PhD at the Albert Einstein College of Medicine, NY, I worked pretty independently. As a product of that training, I am relatively “hands-off” as a Principal Investigator. When students come to my lab, they are presented with different projects that relate to our work on neuromodulation in the olfactory system. I believe students have to have a basic project that will work. From that project, they receive training and start to think about where the research can lead. My former PhD students have done well in their post-doctoral fellowships, but on the other hand, I know that not all graduate students may like my approach. My students always write the first draft of the manuscript; I always tell them it is their story and their paper. Afterward, we will go back and forth, with comments and suggestions for the figures.”

“I believe students have to have a basic project that will work. From that project, they receive training and start to think about where the research can lead…My students always write the first draft of the manuscript; I always tell them it is their story and their paper.”

Ruilong: “My experience with Ricardo’s mentoring philosophy has been very positive. Even though Ricardo encourages his students to be quite independent with their research, he is always available. In fact, he normally uses a desk in the lab, rather than his office. It was a great training and learning experience to write the manuscript myself first, then to go back and forth based on Ricardo’s comments. It made me think about each sentence that I wrote in the manuscript.”

How was your experience with the eNeuro review process?
Ruilong: “I remember seeing advertisements for eNeuro at the SfN annual meeting. Then when I looked at the journal, I thought the papers published in eNeuro were great. I heard about some researchers waiting up to a year for their papers to be accepted in other journals, and I did not want to have that experience. I particularly liked the fact that the review process at eNeuro is faster than most journals. It was my first time dealing with reviewers’ comments, and I thought the review process at eNeuro was fair and turned out better than I expected.”

Ricardo: “Another researcher told me about eNeuro at the SfN annual meeting and suggested that I submit a paper there. My only hesitation was that eNeuro was a new journal at the time, and I wondered whether publishing there would lead to citations. However, I believed that eNeuro would provide a fair review process, and it did. From my perspective, I never reject a manuscript unless I feel it does not belong to that journal. I look at what the journal’s expectations are terms of the data, so I may recommend more experiments to improve the paper. With that in mind, our eNeuro paper was reviewed in the manner that I would have liked it to have been reviewed. With the publication of the Synthesis statement, everyone can read the reviewers’ comments, which I think is important. I believe that neuroscientists should be the people who judge the quality of each journal.”

What are your future research goals?
Ruilong: “I am currently looking for a post-doc position where I can research glial neurobiology and learn more molecular techniques. Right now, I can do slice electrophysiology, and I have experience in analyzing in vivo electrophysiology data. I have experience with animal behavior as well as writing code for automated video tracking of mice, and I am the second author on a Journal of Neuroscience paper from the Araneda lab that was published in 2015 where this was implemented. For now, I want a post-doc experience where I can learn something different.”

Ricardo: “Currently, we use our expertise in molecular techniques, slice electrophysiology, and behavior to study olfactory circuits. But we would like to understand the function of these circuits in behaving animals. It’s not enough to say I am interested in how the circuits work – we have to put it in a behavioral context. Therefore, we are currently implementing in vivo electrophysiological recordings. For me, that would involve imaging or calcium photometry in behaving animals or looking at cells firing in vivo. Through a collaboration, we are examining how olfactory circuits are affected by changes that occur in aging and Alzheimer’s disease. So, there are plenty of projects to do, but the challenge is to incorporate new approaches, especially with all the new molecular techniques now available. This can also be achieved by collaborations with other groups.”