The acquisition of native language reading skills is associated with specialization of the visual word form area (VWFA) for printed word recognition. The VWFA, located in the left fusiform gyrus, shows heightened neural responses to printed words compared to non-word stimuli. Specialization of the VWFA is dependent on the acquisition of literacy – one needs to learn how to read for specialization of this neural tissue to occur. In contrast, the fusiform face area (FFA) and parahippocampal place area (PPA) can process images of faces and houses, respectively, without any dedicated social instruction. Compared to children, adults typically find learning a second language challenging. However, if a second language has a similar alphabet to English, visual recognition of familiar letters could contribute to the literacy skills in the new language. In their eNeuro publication, Martin and colleagues examined to what extent the flexibility of the VWFA depends on the visual similarity between new letter forms and those of the native language.

To address this question, the authors created an artificial orthography, HouseFont, in which visual images of houses denoted particular phonemes (perceptually distinct units of sound) in the English language. This enabled the authors to determine whether attaining reading proficiency in HouseFont would rely on the VWFA or neural tissue that is preferentially activated by visual stimuli. Images of houses were selected because neural responses of the VWFA and PPA can be spatially distinguished using functional magnetic resonance imaging (fMRI). HouseFont was devised to mimic the print-sound mapping manner in which the English language is learned. For instance, individuals learn distinct phenomes such as the /h/ sound in “hit” or the /i/ sound in “eat” that are combined to generate the correct spoken form of a written word. HouseFont consisted of 35 graphemes (the smallest units in which phonemes can be written) that each represented a vowel or consonant in the English language. Examples of grapheme-to-phenome mappings are shown in Figure 1A. Figure 1B shows an example of HouseFont text that was part of one of the six short stories used in the study. In English, this example translates to “Look, Father. See the ball.” 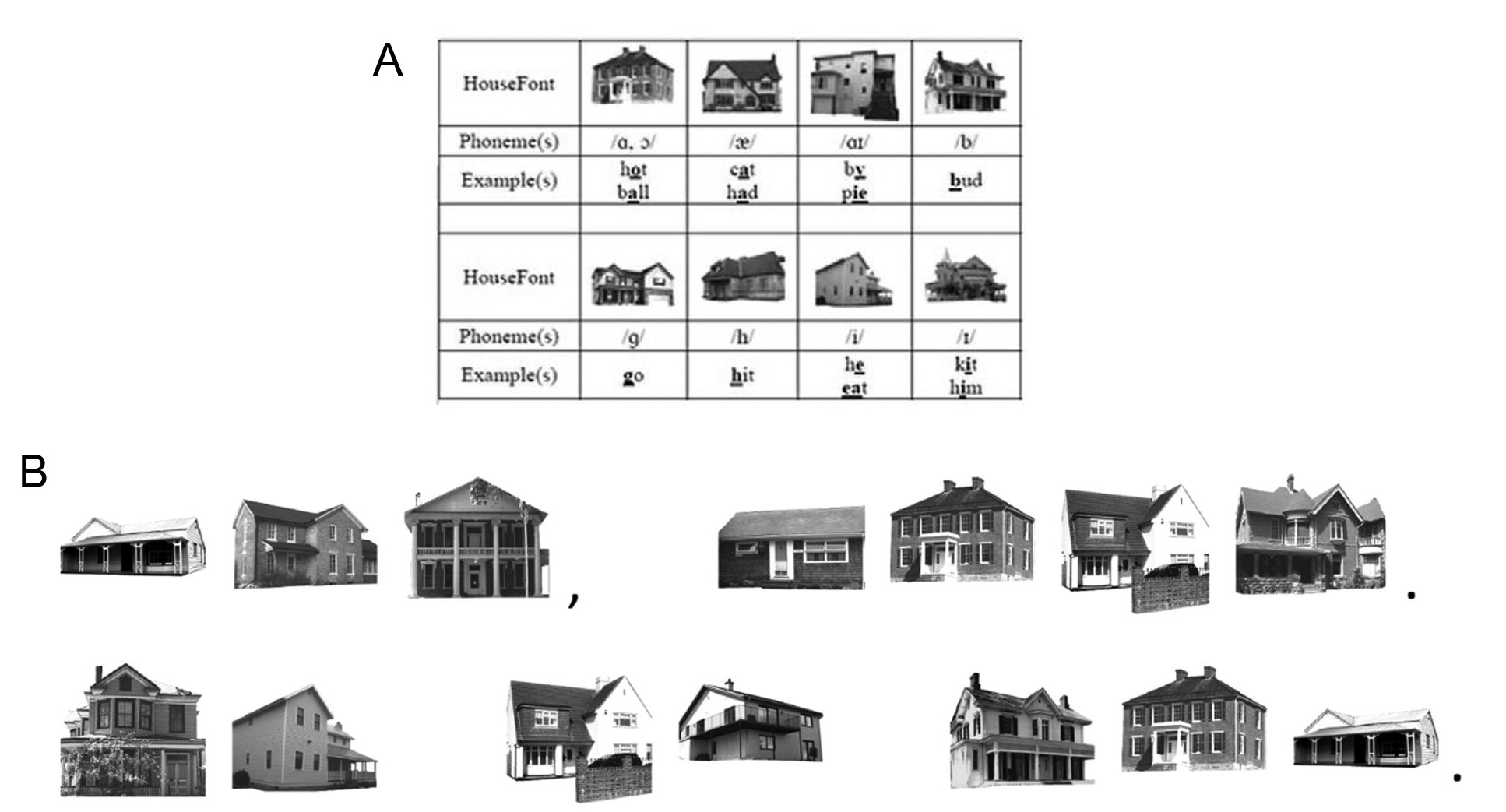 Figure 1.  Examples of grapheme-to-phenome mappings and sample text in HouseFont. (A) (B) An example of part of a story printed in HouseFont. It reads, “Look, Father. See the ball.” (Adapted from Figure 1 and Figure 2 in Martin et al., 2019.)

The participants were 12 adult native English language speakers who had no fluency in a second language. Prior to learning HouseFont, the participants underwent two fMRI imaging sessions. The first was used to localize the three brain regions of interest in each subject: the VWFA and the left and right parahippocampal place areas (LPPA and RPPA). The second pre-training imaging session measured brain responses elicited by looking at representations of HouseFont and KoreanFont, an artificial orthography containing letters, that the authors developed in a prior study (Moore et al., 2014). The participants were not familiar with KoreanFont and did not receive any training in that orthography. The first two imaging sessions were used as baseline estimated brain responses (estimated regression coefficients) prior to training sessions in which the participants learned HouseFont. The subjects underwent nine HouseFont training sessions to first associate each grapheme with its corresponding phoneme, to develop the ability to read words and to achieve basic reading proficiency. During testing, each participant read six stories written in HouseFont, and a third fRMI imaging session was performed.

Although the participants read HouseFont at a slow pace, the average reading accuracy across all participants and stories was 90%; reading proficiency increased as training sessions progressed. The fRMI analyses compared pre- and post-training brain responses in the VWFA, LPPA, and RPPA in response to HouseFont and the untrained KoreanFont. Cross-session fRMI analyses showed that the VWFA was more engaged after training when the participants viewed words printed in HouseFont but not KoreanFont (Figure 2A). The LPPA and RPPA showed a larger response to HouseFont than KoreanFont; however, neural activity in these areas was not statistically different between pre- and post-training sessions (Figure 2A, 2B). These results suggest that the VWFA is the neural tissue responsible for the ability of the participants to learn HouseFont as a second writing system and that HouseFont was perceived as an orthographic stimulus. 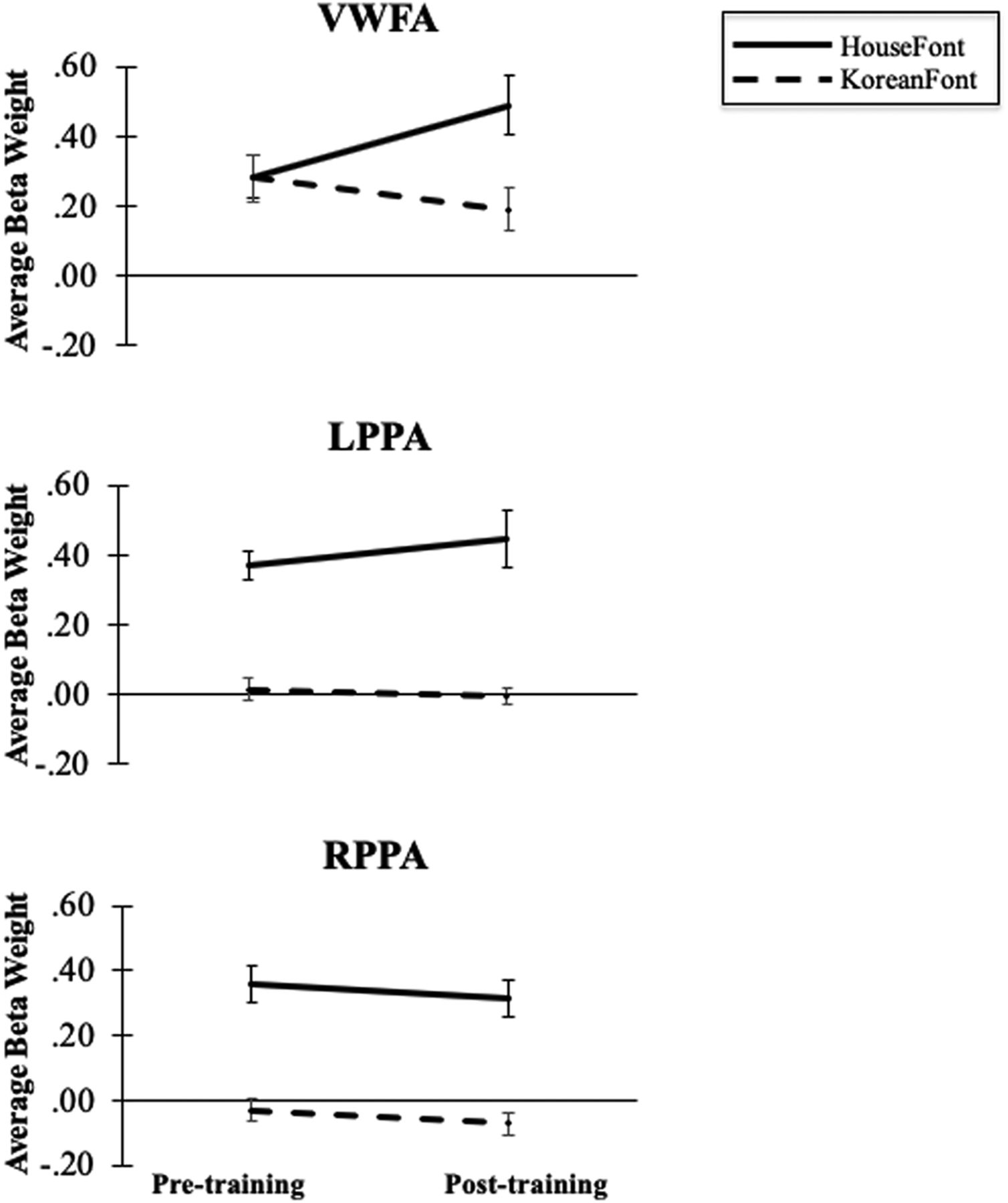 Future work in Professor Fiez’s lab (Learning Research & Development Center, University of Pittsburgh, PA) will look at other brain areas that could be important for language acquisition skills, such as the cerebellum. Further knowledge of how the VWFA becomes specialized during the acquisition of literacy skills could potentially lead to new approaches for individuals who have difficulty learning to read in their native language or learning a second language with a writing system that is very different from the one they use to read in their native language.

The VWFA Is the Home of Orthographic Learning When Houses Are Used as Letters
Lea Martin, Corrine Durisko, Michelle W. Moore, Marc N. Coutanche, Deborah Chen and Julie A. Fiez