Do All Olfactory Cortices Send Feedback Projections to the Olfactory Bulb?

Studies have investigated how excitatory feedback projections from the OC modulate OB processing. For example, it has been proposed that PC feedback signals decorrelate the activity of M/TCs, allowing separation of odor representations. Similarly, research also suggests that AON feedback innervation modulates the timing of action potentials in M/TCs, which contributes to the reduction of background noise during odor responses. In contrast, the role of the OT in shaping early odor processing has received less attention. Similar to the PC and AON, the OT receives direct inputs from the OB output neurons. Previous studies indicated that similar to other regions of the OC, the OT sends direct feedback projections to the OB. In their eNeuro publication, in’t Zandt and colleagues performed a detailed analysis of the neuroanatomical connections of the OB with olfactory-related areas.

Three types of labeling experiments were performed in 6- to 12-week old mice (n = 19 male, n = 4 female). First, the authors microinjected fluorescent retrobead particles in the OB. These particles are endocytosed by axons and accumulate in the cell bodies of the OB-projecting neurons. As expected, PC and AON were readily labeled; however, no particles accumulated in OT neurons. Second, the absence of OT feedback projections to the OB was further confirmed by using retrograde adenoviruses to express green fluorescent protein. These viral particles efficiently infect neurons by their axon terminals, followed by retrograde transport to the soma where the fluorescent reporter is expressed. A third strategy to test for OT-OB direct connections included the use of a reporter mouse line (Ai9) that expresses the fluorophore tdTomato in the presence of the Cre recombinase. Cre recombinase expression was driven by a viral infection in the OB using a retrograde adenovirus. Again, this approach showed the labeling of multiple cortical and subcortical areas known to innervate the OB, yet tdTomato was not observed in OT neurons (Figure 1). 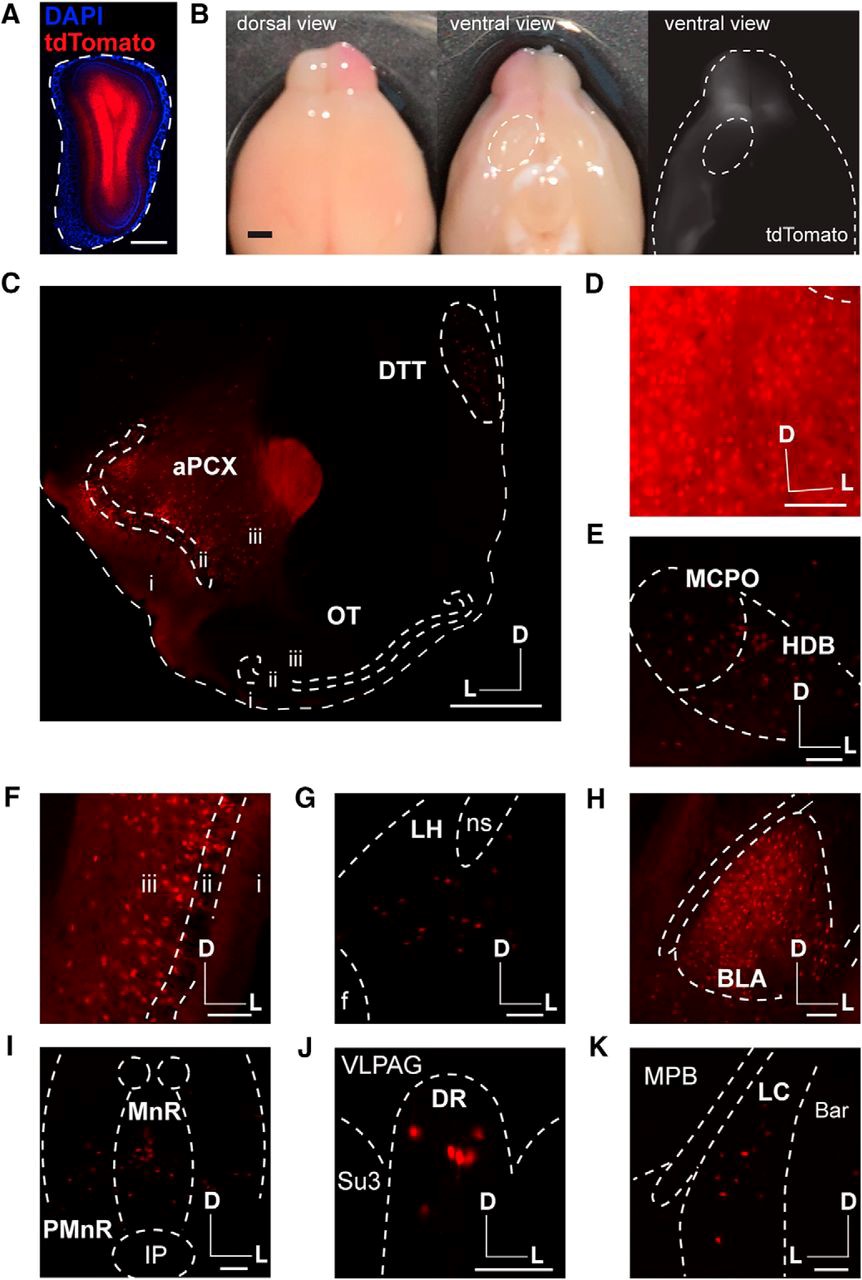 In their publication, in’t Zandt and colleagues confirm well-established olfactory circuits, such as feedback projections form the PC and AON to the OB. However, their use of various retrograde tracing techniques failed to reveal a direct connection from the OT to the OB. The authors discuss their observations in the context of the experimental approaches used in prior studies. The results presented suggest that, unlike the direct influence in OB processing by the PC and AON, the influence of the OT on olfactory function is likely to occur at a higher-order processing level. The authors’ neuroanatomical analysis will help further the understanding of the role of the OT in odor perception. Instead of directly modulating the OB, the OT may act as a multimodal integrator, which serves to link contextual odor information with ongoing odor processing in other OCs. Future experiments should address this possibility by examining areas targeted by OT neurons using the combination of retrograde tracing techniques that in’t Zandt and colleagues used in this study.