The study participants were 28 right-handed adults. Each participant was assigned to either a hand-tracking or eye-tracking task, which assessed the motor control and sensory prediction performances of the right or left hand. A schematic drawing of the experimental setup is shown in Figure 1A. The participants were seated at a table facing a screen. A joystick was located in the center of the table, and an infrared video-based eye tracker was located in front of the screen. In the hand-tracking task, the participants were instructed to move the joystick such that the corresponding cursor representing hand movement (red circle on a screen) followed a predetermined target trajectory (blue circle on the screen; Figure 1B). In the eye-tracking task, the participants were instructed to focus their eye gaze on a self-produced, non-predetermined trajectory, in which the visual target on the screen (red circle) was controlled by each participant’s movement of the joystick (Figure 1C). 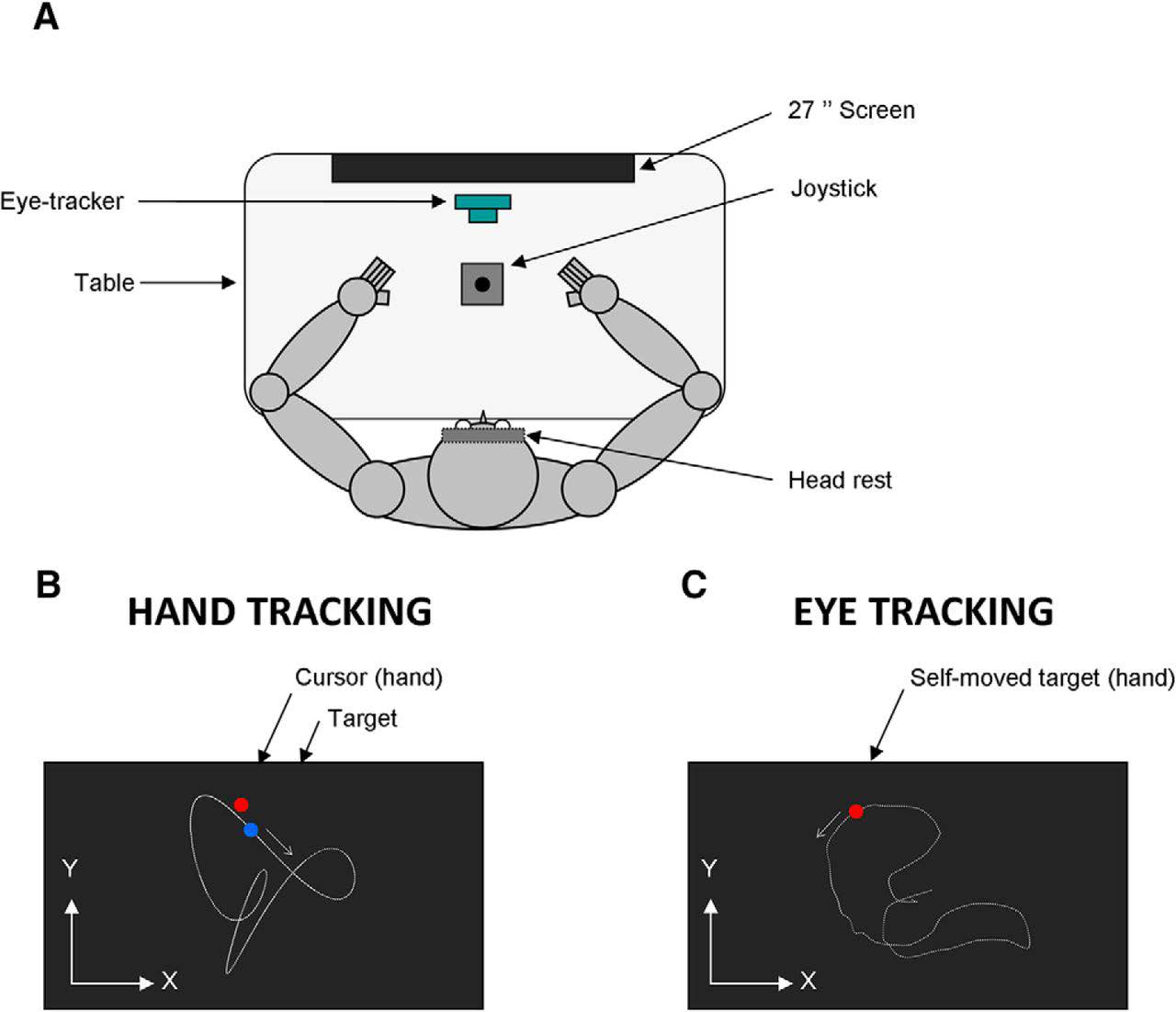 Figure 1. Schematic drawing of the experimental setup. (A) Top view of the participant sitting in the experimental setup. (B) Representative example of the cursor and target circles on the screen during the hand-tracking task. (C) Representative example of the self-moved target during the eye-tracking task. The target trajectory (white dotted trace) and x–y reference system is displayed for illustration purposes but was not visible to the participant. (Figure 1 in Mathew et al., 2019.)

In the hand-tracking task, ten trials of equal trajectory pattern length and trial duration were performed with each hand; half the participants performed trials with the left hand prior to commencing trials using the right hand. The cursor (joystick motion) trajectory was measured in x- and y-axis coordinates with respect to the target trajectory. When participants used their left (non-dominant) hand, the trajectory of the cursor deviated more from that of the target, compared to right-hand use. A representative example of one trial by one participant using the left hand (Figure 2A) and right hand (Figure 2B) is shown. The cursor-target distance was approximately 16% higher with left-hand use compared to right-hand use. No temporal difference in the control of joystick motion was found between hands. As expected, these observations support other studies that show that motor control is better with the dominant hand. 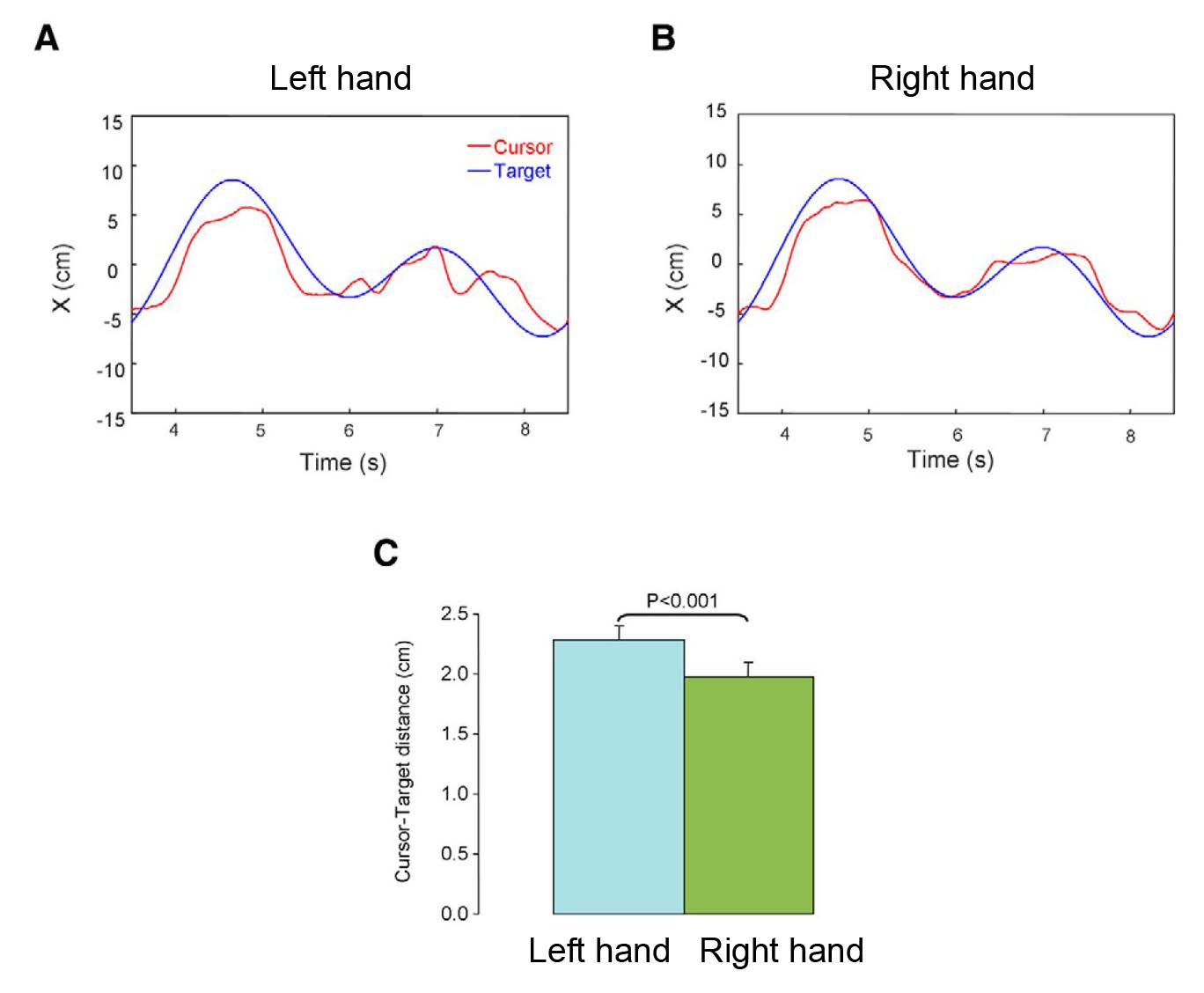 Figure 2. Horizontal component of typical hand tracking trials performed by the same participant with the same target trajectory. The cursor (red) is generally closer to the target (blue) when being moved by the right hand (B) compared with the left hand (A). (C) Mean group hand tracking error when tracking the target that was controlled by joystick motion by right or the left hand. Error bars represent the standard error of the mean. (Adapted from Figure 3 and Figure 5 in Mathew et al., 2019.)

In the eye-tracking task, ten trials were performed with each hand; half the participants started the trials using the left hand. A representative example of one trial by one participant using the left hand (Figure 3A) and right hand (Figure 3B) is shown. Unlike the results from the hand-tracking task, there was no effect of handedness on the ability to visually track the self-generated trajectory (Figure 3C). An additional experiment confirmed that the eye-tracking task had assessed predictive outcomes of non-predetermined, self-generated hand movement, rather than a passive, visually responsive task only. 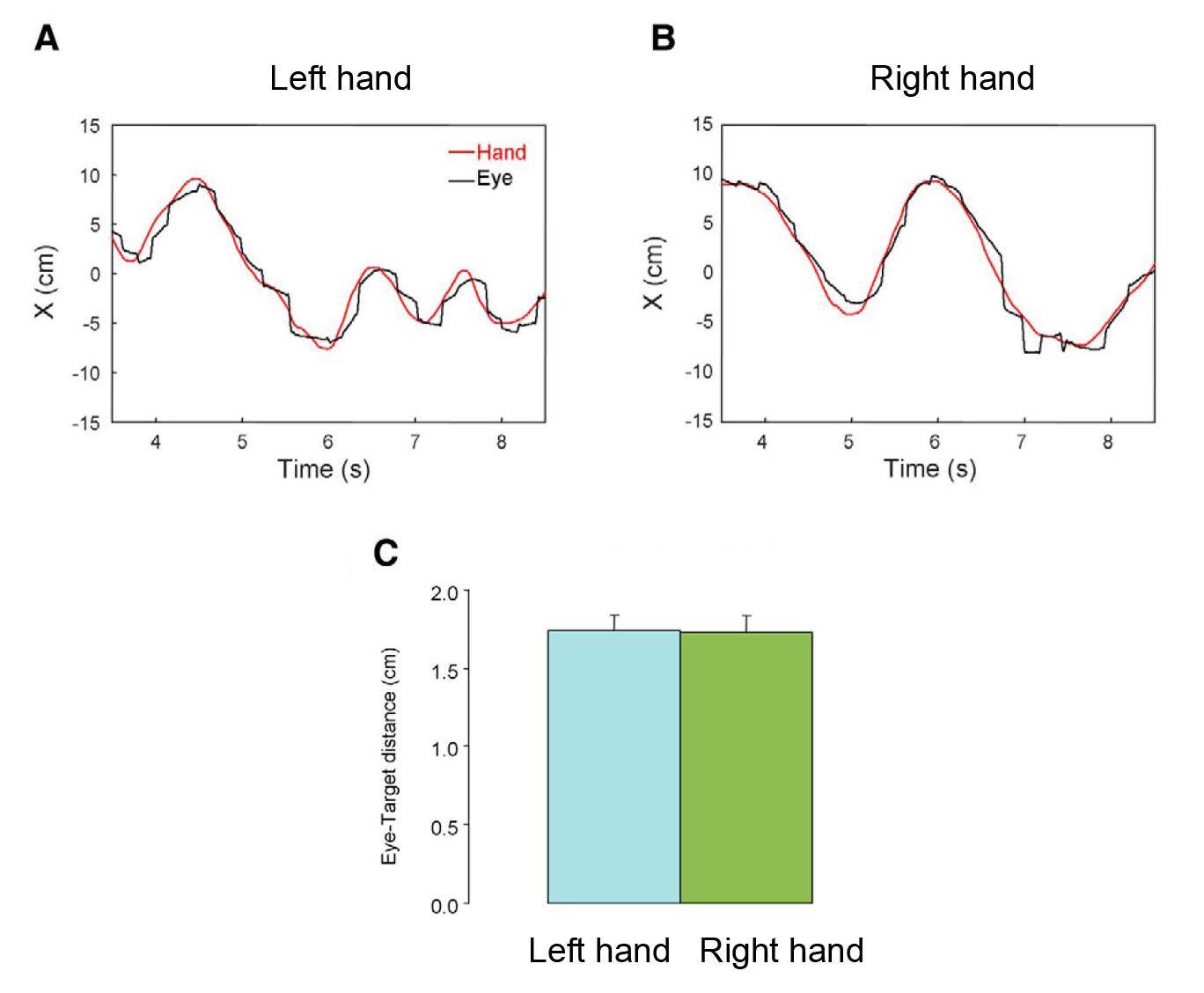 Figure 3. Horizontal component of typical eye tracking performance by the same participant. Performance when moving the target with either the left (A) or right hand (B). (C) Mean group eye tracking error when moving the target either with the left or right hand. Error bars represent the standard error of the mean. (Adapted from Figure 4 and Figure 5 in Mathew et al., 2019.)

The findings of Mathew and colleagues’ eNeuro publication indicate that handedness is important for motor control but does not have a noticeable impact on sensory prediction. These observations suggest that the neural processes that underlie motor control and sensory prediction are distinct. In both tasks, each participant’s ability to perform the tasks was correlated across hands, perhaps relating to cognitive or visual information processing functions that are not affected by brain lateralization, unlike motor control. The current experiments remain to be tested in left-handed individuals. It is also not known whether brain regions associated with the sensory prediction of hand movement exhibit hemispheric lateralization. Future studies in Dr. Frederic Danion’s laboratory (Aix Marseille University, CNRS, Institut des Neurosciences de la Timone, Marseille, France) aim to determine whether adaptations of motor control and prediction can be transferred between the left and right hands. For example, if the joystick properties were altered in terms of motion along x- and y-axis coordinates, would handedness affect the speed at which this new neural mapping is learned by each hand. Moreover, it would be interesting to determine the capacity of the brain to transfer this adaptation between the dominant and non-dominant hands.