Interneuron Defects in a New Mouse Model of Premature Birth

Dr. Santiago is currently a postdoctoral researcher at Oregon Health and Science University, Portland, OR.

In 2017, nearly one in ten live births in the US was considered preterm (March of Dimes Foundation, 2019). Premature birth is associated with an increased risk for neurodevelopmental defects that may contribute to future psychiatric disorders. Some of these disorders include dysfunction of inhibitory (GABAergic) neuronal circuits, which may result from pre- or peri-natal defects in the generation of inhibitory neurons or the integration of neurons into brain circuitry. Given the difficulty of procuring and experimentally manipulating human brain tissue from preterm infants, Lacaille and colleagues sought to develop and validate a mouse model of prematurity that could better replicate the neuronal defects and cognitive impairments observed in humans. In their eNeuro publication, Lacaille and colleagues describe a novel “multi-hit” preclinical model for prematurity that combines prenatal inflammation and postnatal hypoxia, two common brain insults seen in extremely preterm birth.

In humans, dysfunction of inhibitory neurons in Broadman Area 9 (BA9) of the prefrontal cortex has been linked to bipolar disorder, schizophrenia, vascular dementia, and depression. Given these known links, the authors first assessed interneuron density in BA9 in tissue samples from 13 term and 14 preterm infants (human tissue was obtained from the National Institutes of Health NeurobioBank, University of Maryland, Baltimore, MD). A panel of antibodies was used to label inhibitory cells that expressed GABA synthesizing enzymes glutamic acid decarboxylase (GAD)-65/67 or interneuron subset-specific markers, such as somatostatin (SST) and calbindin (CB). Lacaille and colleagues found that extreme prematurity was linked to reductions in GAD65/67-, SST-, and CB-expressing interneurons in the upper layers of BA9, compared to age-matched term infants.

Next, the authors determined whether similar interneuron defects would be induced by a single prenatal/postnatal insult or by combined insults in a mouse model of premature birth. Pregnant transgenic GAD65-GFP mice were injected intraperitoneally with lipopolysaccharide (LPS), or saline as control, on embryonic day (E) 15.5 and E16.5 to induce maternal immune activation (MIA). MIA mimics chorioamnionitis, an infection of the placenta and amniotic fluid, which is associated with ~85% of extreme preterm births. After birth, at postnatal day (P) 3, the dams and pups were subsequently housed in hypoxic conditions for a week to induce chronic sublethal hypoxia (CSH), modeling preterm respiratory failure; housing in normoxic conditions served as a control. Overall, four experimental groups included mice that had received no exposure to insult (MIA–/CSH–), exposure to MIA but housed in normoxic conditions (MIA+/CSH–), no MIA but housed in hypoxic conditions (MIA–/CSH+) or both insults (MIA+/CSH+).

The authors examined interneuron abundance and distribution in two prefrontal cortical regions homologous to BA9, the anterior cingulate cortex (ACC) the prelimbic area (PL). At P30, mice MIA+/CSH+ mice exhibited fewer cells that expressed GAD65/67 (Figure 1), SST, CB, parvalbumin, vasoactive-intestinal polypeptide (VIP), and neuropeptide Y (NPY), compared to MIA–/CSH– mice. These results show that the multi-hit mouse model of prematurity resulted in similar defects in interneuron development to human BA9. The study included further analyses that elucidated the differential contributions of MIA and CSH to abnormalities in specific subtypes of interneurons. For example, CSH alone was sufficient to reduce the number of CB-positive layer V neurons to the same degree as the multi-hit model. Decreases in NPY and VIP expression found in the multi-hit model could be reproduced by single insults of either MIA or CSH. Therefore, whereas single insults can affect interneuron abundance and density in the adult mouse, the multi-hit approach represents a novel model of prematurity that more closely resembles the pathology observed in humans. 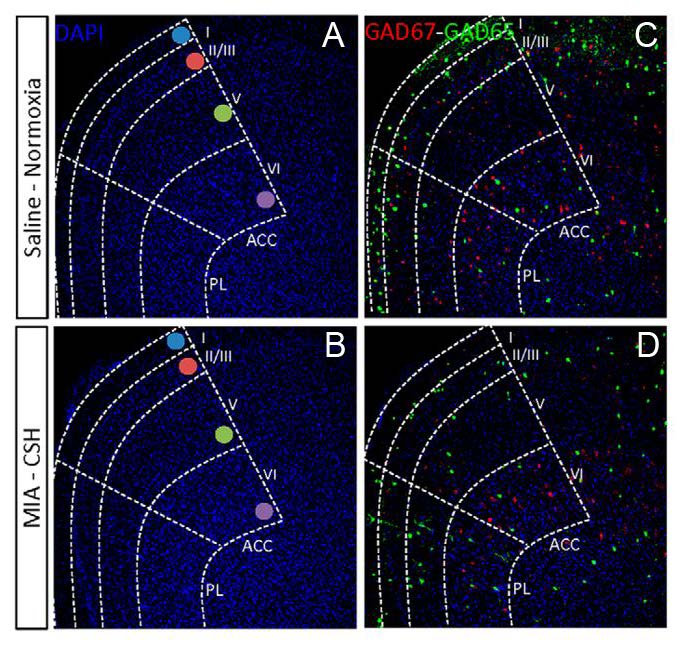 Figure 1.  Effect of combined MIA and CSH on interneuron number and distribution in the ACC PL of the mouse prefrontal cortex at P30. (A-D) Representative brain sections of mice injected with saline and reared under normoxia (A,C), and mice subjected to MIA and reared under CSH (B,D) are shown. (A,B) Cortical layer delineation as shown by DAPI nuclear stain (blue). (C,D) Density and laminar distribution of GAD67-positive cells (red) overlaid with (B) GAD65-GFP fluorescence (green) in layers I, II/III, V, and VI. (Adapted from Figure 2 in Lacaille et al., 2019.)

Lacaille and colleagues also examined whether MIA altered the proliferation of interneuron progenitors during development in mice. At E17.5, compared to saline-exposed fetuses, MIA resulted in a decrease in proliferating interneuron progenitors. The authors also found increased expression of genes that are involved in interneuron fate determination and migration, indicating that the effects of MIA alone could be rescued by compensatory mechanisms. Indeed, the number of GAD65-positive cells in mice exposed to MIA alone recovered by P10. However, this recovery was prevented by the additional postnatal CSH insult; mice that were exposed to both MIA and CSH exhibited interneuron reductions that persisted into adulthood.

To determine whether combined prenatal and postnatal insults resulted in cognitive function defects, adult mice were subjected to a battery of behavioral assays linked to prefrontal cortical function. A water T-maze test revealed deficits in working memory and reversal learning in MIA+/CSH+ that were not observed in the other experimental groups (Figure 2). MIA+/CSH+ mice were also less sociable than the other experimental groups; MIA+/CSH+ mice displayed less overall interaction time with an unfamiliar mouse in social novelty tests.

Figure 2. Assessment of learning and reversal learning in the water T-maze. Percentage of correct choice during (A) the learning phase (5 days) and (B) the reversal phase of the test (4 days). Values represent the mean ± standard error of the mean. * indicates p < 0.05 compared to the MIA–/CSH– group. (Adapted from Figure 7 in Lacaille et al., 2019.)

In their eNeuro publication, Lacaille and colleagues present a novel model for prematurity that incorporates both pre- and postnatal brain insults seen in extremely preterm births. Such a model induces phenotypes of interneuron defects that closely resembles the defects that the authors also described in human preterm brain tissue. Therefore, this novel multi-hit mouse model of prematurity offers numerous opportunities to explore further the links between interneuron dysfunction and the neurobehavioral risks that accompany preterm births in humans.