Beyond the Paper: A Conversation with Victoria Jensen and Steven Crone 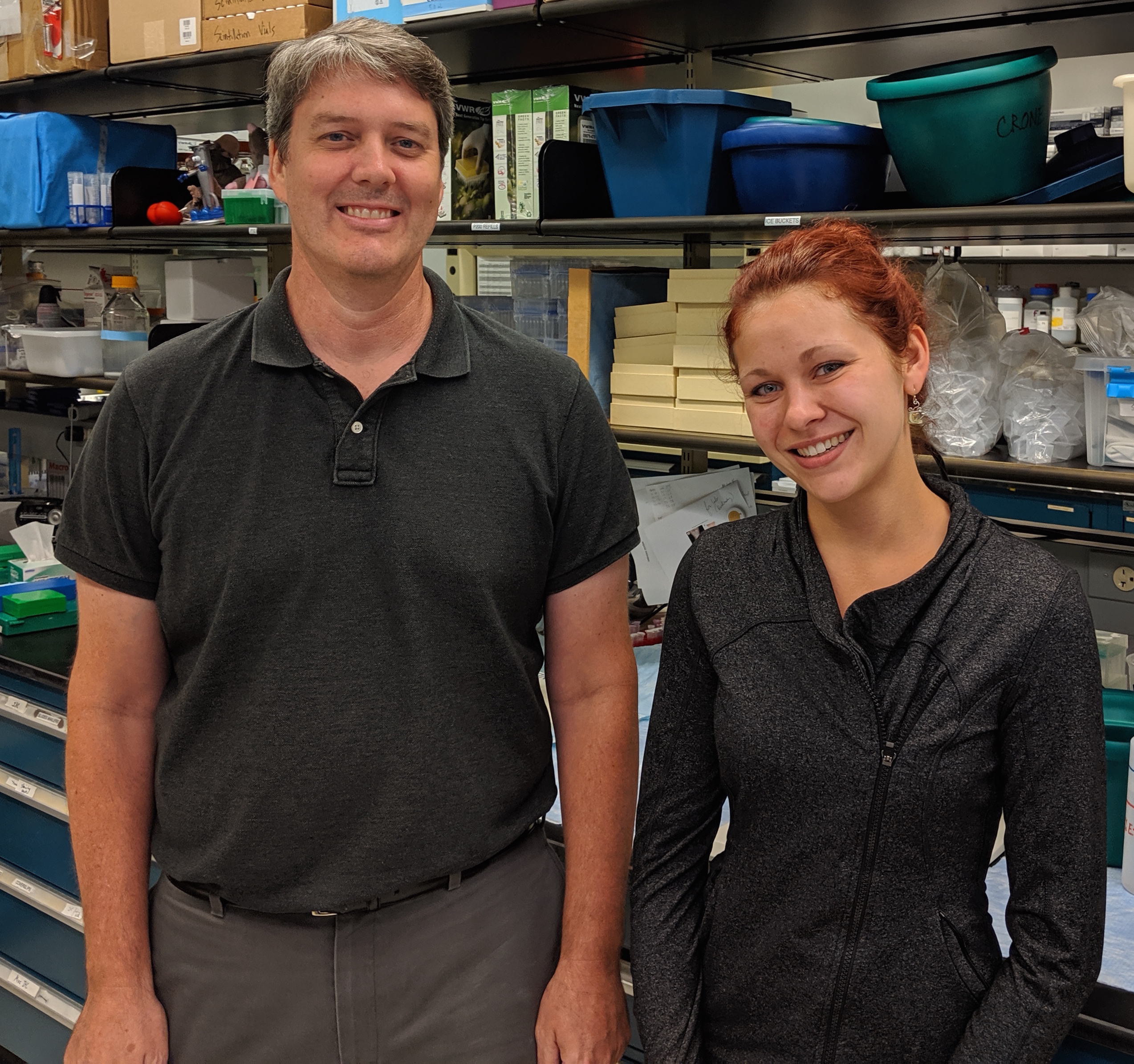 Steven: “In a prior study, we showed that V2a neurons are important for rhythm generation, producing the frequency of breathing as opposed to the other aspect of breathing, pattern generation, which refers to the specific muscles that are being activated and in what order activation occurs. The differences between rhythm and pattern generation is an interest of mine. I wanted to measure the activation of different muscles to see how neural control of the diaphragm might differ from that of the accessory respiratory muscles and to determine the associated circuitry. This eNeuro paper developed from what we thought would be a control experiment in wild-type mice for another project; however, we had an unexpected finding. We expected that when we silenced V2a neurons in adult mice, there would be no accessory respiratory muscle activation because we had previously shown that activation occurred when we increased the excitability of V2a neurons. But what we found is that both increasing or decreasing the excitability of V2a neurons resulted in accessory respiratory muscle activation. Therefore, this study was not one that we conceptualized but quickly led into a new line of investigation.”

Victoria: “When I came to the lab and was reviewing the literature, I learned how complex the neural control of the respiratory system is. Since I enjoy a challenge, I was eager to develop new ways in which we could combine ongoing recordings of muscle activity with a DREADD approach to silence V2a neurons at different developmental stages. As Steve said, this study started from what was originally intended to be a control experiment, but our unexpected findings led us to an entirely new study in itself.”

Victoria: “I have to say the most powerful technique I developed was implanting radio transmitters into mice to perform chronic electromyography (EMG) recordings of the diaphragm. Very few people in the respiratory field perform these in mice because the surgeries are technically challenging—the diaphragm is very thin and easy to puncture during implantation of the electrodes, which can be fatal for the mouse. After a couple of months of trial and error, I became successful at diaphragm EMG recordings. We now can use transgenic mice to manipulate V2a neurons with DREADDs and record diaphragm EMG activity not only in healthy mice but following neuromuscular disease and spinal cord injury as well.

In addition, I also learned how to measure ventilation in neonates for this study since my previous studies used plethysmography chambers designed to measure breathing in adult mice. Plethysmography works by detecting changes in pressure during breathing, but since neonatal mice are so small, we needed to detect very small changes in pressure. We asked for help from Dr. John Lorenz (University of Cincinnati College of Medicine), who had built a plethysmography chamber specifically for use with neonatal mice.”

Steven: “Developing this method of diaphragm EMG recording was very challenging because not only is the mouse diaphragm thin, it is moving back and forth at three times per second. This made it particularly hard for Victoria to implant the electrodes, and it took skill, practice, and a lot of determination on her part. Even when it did not work the first couple of times, she stayed at it up to the point where it now works consistently almost every time. Victoria deserves a lot of credit for her persistence; the other results of our study would have been very difficult to interpret if we did not have the diaphragm EMG recordings. This is now an established technique in the lab.”

“My job is to provide the environment in which the investigators have the models and tools to do the experiments. I give guidance to make sure that the most critical experiments are given top priority. I give my team the flexibility to design their experiments so that they can learn how to become an independent investigator.”

Steven: “We show the differential regulation by V2a neurons of diaphragm activity and accessory respiratory muscle recruitment, which may have been previously hypothesized but not demonstrated to our knowledge. In addition, the finding that precise function of V2a neurons in regulating breathing in neonatal mice is distinct from that in adult mice provides more evidence that neuronal function can change over time. It is likely applicable to many fields within neuroscience that neuronal function during adulthood may not be the same as in neonates, so neuronal characterization at different developmental stages is important. In terms of clinical relevance, breathing difficulties are present in newborns with spinal muscular atrophy, also known as floppy baby syndrome. These newborns tend to have weak trunk muscles and exhibit paradoxical breathing—when they breathe in, the diaphragm moves down, but their chest will collapse as the intercostal muscles are too weak to maintain the rigidity of the chest. Paradoxical breathing or insufficient ventilation can also occur in patients with spinal cord injury, amyotrophic lateral sclerosis, and other neuromuscular diseases. Improving the function of accessory respiratory muscles may be beneficial for these conditions. Understanding the neural control of accessory respiratory muscles could lead to new clinical approaches to facilitate breathing.”

Steven: “My job is to provide the environment in which the investigators have the models and tools to do the experiments. I give guidance to make sure that the most critical experiments are given top priority. I give my team the flexibility to design their experiments so that they can learn how to become an independent investigator. Victoria wrote the first draft of the eNeuro paper; it is important for my mentees to do so. Then, we go back and forth and do revisions; I always try to explain my suggested edits, so my trainees understand why I made each change.”

Victoria: “When I started in the lab, Steve told me that he wanted everyone to come up with ideas and experiments. He does a really great job of providing independence while still keeping an open-door policy to give us proper guidance. He has also always stressed the importance of communicating our science. From day one, he provided the opportunity to present my work in lab meetings, journal clubs, and at conferences. In fact, these joint lab meetings allow us to learn about neural circuitry controlling pain and locomotion. We can then apply this knowledge to better design our experiments to study the neural control of respiratory muscles.”

Victoria: “I was really impressed that the review process was quick, yet the quality and the standards of the review were still high. The reviewers’ comments were thorough but fair.”

Steven: “I really like the fact that eNeuro is a broad, accessible journal that is read by a wide range of scientists. I felt that the physiology and circuit components of this paper intersect with different fields and that some of the principles of our study would be of interest to researchers outside of respiratory physiology and circuit analysis. We also like that eNeuro is open access so that many researchers have access to the paper.”

“I was really impressed that the review process was quick, yet the quality and the standards of the review were still high. The reviewers’ comments were thorough but fair. ”

Have you received any feedback from other researchers about this study?

Steven: “Several people emailed me before I even knew that the paper was online to say congratulations. I was surprised at how quickly I received these messages after the paper appeared online, which speaks to the wide readership of the journal.”

Victoria: “One issue that we mentioned in the discussion is that when we silence V2a neurons and see changes in ventilation and respiratory muscle activity, we are affecting a wide range of V2a neurons located in the brainstem and spinal cord. We are currently using viruses to examine whether targeting more specific neuronal populations can recapitulate the phenotypes we observed in this study. Long-term, I plan to stay in academia. I am currently considering a postdoctoral position after I graduate that will give me the opportunity to learn how to measure the activity of individual neurons that control breathing and how they are affected by spinal cord injury.”