Beyond the Paper: A Conversation with Ankan Biswas and Supratim Ray

Alpha rhythm (8–13 Hz) is linked to a relaxed mental state in humans. Prior studies have shown that individuals can increase their alpha power when provided with valid feedback, compared to controls who are provided invalid feedback. However, these results remain controversial, partly because controls may be in a different behavioral state, making it difficult to directly compare their alpha power with the valid group. In their eNeuro publication, Biswas and Ray used an experimental paradigm in which invalid feedback was given on a fraction of trials, such that both valid and invalid conditions could be obtained from the same participant. Using electroencephalography (EEG), the authors recorded alpha power from the occipital area of 24 human participants and played an auditory feedback tone, which was valid, invalid (participants were unaware of this condition), or neutral. Biswas and Ray found that during the eyes closed-state, neurofeedback did not enhance alpha activity beyond the pre-trained state, probably because of saturation of alpha rhythmicity. However, for participants whose alpha power decreased over time within a trial, valid feedback helped them to sustain alpha power more than invalid feedback. The findings may help reconcile many conflicting reports in the neurofeedback literature and show that even under most stringent control, valid neurofeedback can help participants who are otherwise unable to sustain their alpha activity. 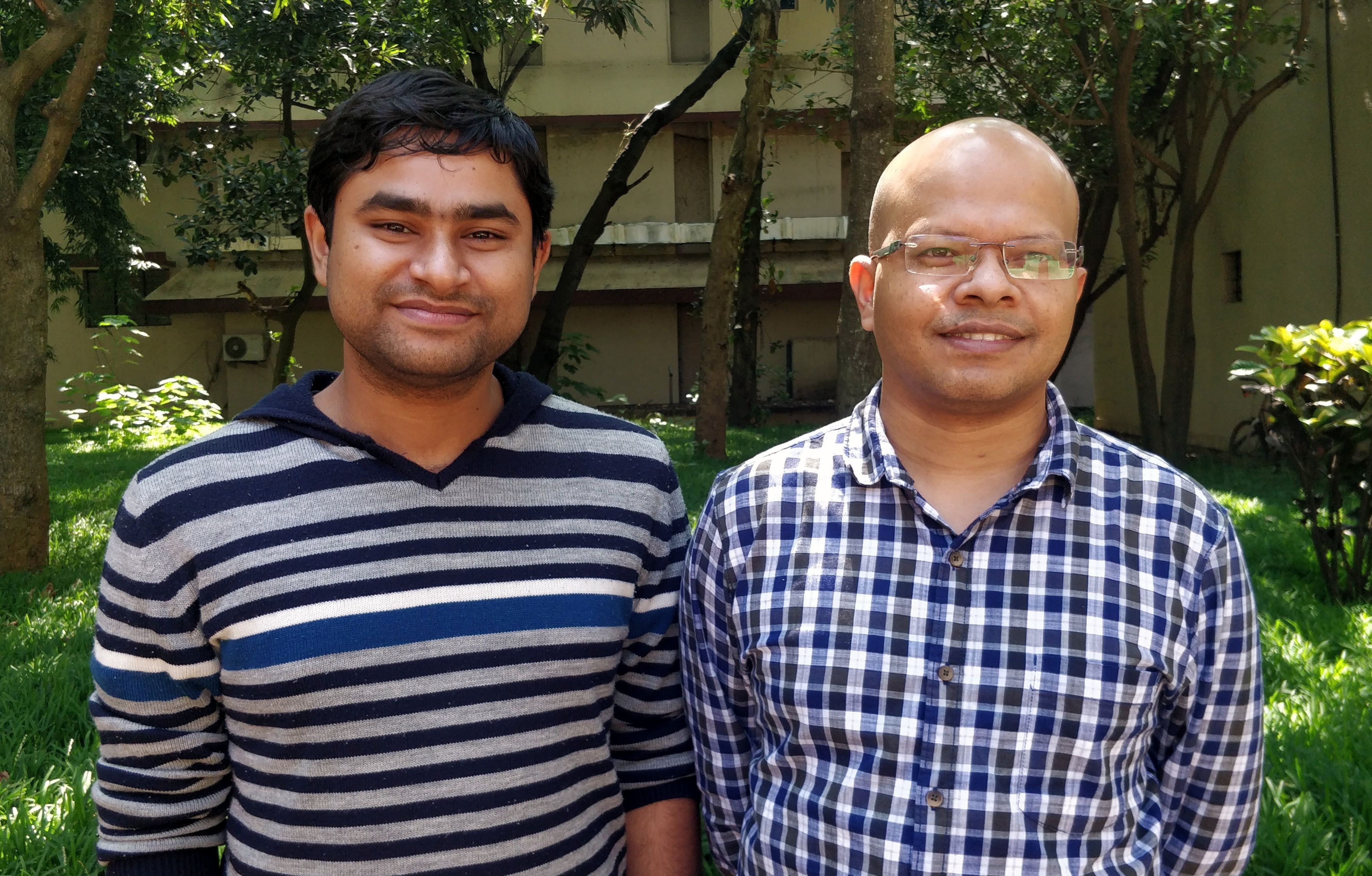 Ankan: “One day each year, the Indian Institute of Science, Bangalore, is open to the public so that they may see the research that is being performed in the Institute. For our initial lab demonstration, which was quite simple, we placed electrodes on the back of participants’ heads and used EEG recordings to show that alpha oscillations became more prominent when the participants closed their eyes. I first became involved with this demonstration while I was an undergraduate student in our lab. Subsequently, we added more complexity to the demonstration by adding neurofeedback to see whether knowing the real-time strength of the alpha power could help participants exert more control over their alpha activity. This experiment was then developed as the project for my bachelor’s thesis.”

Supratim: “During our lab demonstration, we tell the public that we will show them their brain waves and determine whether they can control the oscillations. Typically, we do this demonstration every hour, and many people come to see it. We project the EEG recording of a volunteer on a screen for the audience to see. When we built on initial simple demonstration, we provided real-time audio neurofeedback training based on the extent to which the volunteers could control their alpha oscillations. We played a tone as audio feedback; the frequency depended on the power of the alpha oscillations achieved by each individual.”

Ankan: “I did a literature search of the field of alpha feedback, starting from work published in the 1960s. As methods and knowledge grew, we felt that we could think about new controls for the feedback that participants receive during the trials. What we used for controls was influenced by the research in our lab regarding attention. In terms of the methodology, we designed a real-time neurofeedback system using Matlab for which I had to learn how to code.”

Supratim: “When we investigated the literature in-depth, we realized that there were some opposing findings in the field of neurofeedback. Because my lab studies attention, we were familiar with control paradigms that have evolved over the years. For example, the Posner cueing task incorporates valid, invalid, and neutral cues to determine the focus of attention in a visual task. Therefore, we thought that some of these control methods could be modified and applied to neurofeedback training and alpha oscillations in the occipital area. In each series of trials, we used audio feedback tones that were classified as: valid (tone frequency proportional to alpha power), invalid (a tone sequence from a previous valid trial was used), or neutral (a constant tone frequency was provided as feedback). In this manner, each participant served as his/her control. The participants were not aware that a fraction of the trials included invalid feedback. We used this control approach to determine whether valid feedback was more efficacious in helping participants control their alpha power than invalid or neutral feedback.”

“The community of the Society for Neuroscience played a role in our decision to submit the paper to eNeuro. As the sister journal of the Journal of Neuroscience, we knew that eNeuro is very highly regarded. ”

Supratim: “Our results indicate that in the short-term, valid neurofeedback can influence the maintenance of alpha rhythm activity. Based on other studies, the neural mechanisms underlying this observation may relate to transient increases in neural network plasticity. However, valid feedback did not change the alpha rhythm in all participants. In some people, alpha power tends to fall very quickly, so there is significant inter-individual variation. Although many participants described a feeling of enhanced relaxation in this experiment, we are hesitant to strongly relate our findings to potential cognitive therapies for disorders such as anxiety and depression. However, the present study, to us, showed a proof of concept; the application of stringent controls can help reconcile observations from prior studies that used a different experimental approach.”

Supratim: “I did my graduate and post-doctoral training in the United States—my PhD at Johns Hopkins, and my post-doc at Harvard Medical School. In India, we have many PhD students (who are funded by the institute) and research assistants/undergraduates, but there is a relative paucity of post-doctoral researchers. Consequently, the type of research questions that we work on depends on the students. The mentorship opportunities are primarily directed towards PhD students and research assistants, who may only be in the lab for a short time, but show considerable energy, enthusiasm, and motivation. However, it is harder to delve into very deep questions (which are typically undertaken by post-docs) because the students may not have the appropriate expertise before coming to the lab. Undergraduate students may only spend six months in one lab before learning new techniques or investigating other topics in another lab. Therefore, although we benefit from many undergraduate students, I focus on smaller projects with them. In my lab, PhD students tend to take up more involved projects because we have more time to develop such projects.”

Ankan: “A great aspect of the bachelor’s program at our Institute is that we can spend time performing research in different labs. So, I worked in cancer and ecology labs before coming to Supratim’s lab. I feel that the exposure to several labs is valuable before you commit to a PhD project, which may take five or six years depending on the research. In addition to being very interested in the research topic, I really like Supratim as a mentor. I was quite hesitant about writing the first draft of the paper, but he encouraged me to do so. Then, when we reviewed his edits, I learned how to communicate better. Also, Supratim’s guidance in writing the response to the consensus review was a great learning experience.”

Ankan: “The review process with eNeuro was very good. I like the philosophy of science being open because open-access increases accessibility for researchers to read the results of our study. The reviews were very good and quick; we received the review one month after submission of the manuscript.”

Supratim: “The review process at eNeuro was a very smooth and nice experience. Once we submitted the revision, the paper was accepted very quickly with an editorial, but no external, review. The community of the Society for Neuroscience played a role in our decision to submit the paper to eNeuro. As the sister journal of the Journal of Neuroscience, we knew that eNeuro is very highly regarded. I like that the journal is open access, and now I consider both the Journal of Neuroscience and eNeuro as Society journals for future publications.”

Supratim: “My lab is mainly interested in the neural basis of selective attention, with a focus on gamma (30–80 Hz) oscillations, which are modulated by attentional load and are thought to be associated with high-level cognitive processes. Currently, I do not have active projects regarding neurofeedback, but I am open to pursuing this topic again in the future.”

Ankan: “My PhD project is focused on gamma oscillations and how they relate to color perception in humans and non-human primates. I have considered whether I would like to do a post-doc in the future. However, at the moment, I am focusing on appreciating the great lab and facilities that I am exposed to at this time, rather than dedicating a lot to time thinking about future research goals.”