Beyond the Paper: A Conversation with Ramendra Saha

Epigenetic regulation of activity-induced gene transcription is pivotal in mediating neuronal responses that underlie several transcription-dependent downstream brain processes. Understanding the roles of such epigenetic processes and the mechanism of action of their core components, such as variant histone H2A.Z, would help further knowledge of brain development and function. In vertebrates, H2A.Z has two hypervariants, H2A.Z.1 and H2A.Z.2, which are encoded by different genes and differ by only three amino acids. In theirpublication, Dunn and colleagues provide evidence suggesting that the two hypervariants regulate nonoverlapping gene cohorts in neurons and play context-specific, nonredundant roles in the activity-induced transcription of immediate-early genes. The findings highlight the importance of considering the independent contributions of highly similar variant proteins in transcriptional regulation. 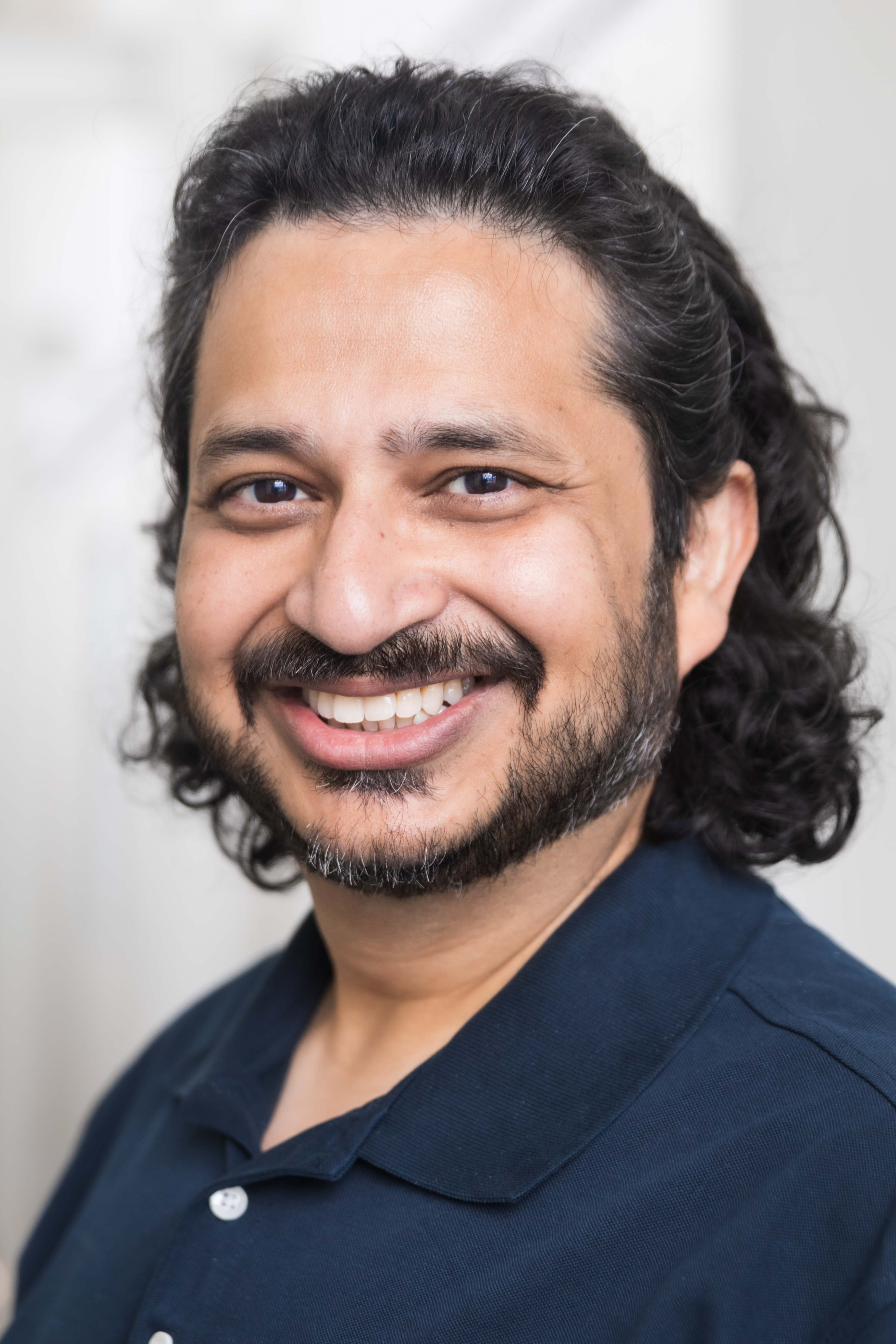 RS: “I was first interested in transcriptional regulation while I was doing my PhD in neurodegeneration. During my post-doctoral fellowship, I studied transcription in relation to synaptic transmission—two independent processes that occur in discrete locations within a neuron but influence each other. H2A.Z is enriched in nucleosomes near promoters and enhancers of many vertebrate genes and can play a critical role in gene transcription. To investigate synaptic activity-induced transcription, I wanted to knock down histone H2A.Z, but no matter how hard I tried, I could not knock it down more than 50%. When I started digging further into the literature, I realized that H2A.Z has two hypervariants, H2A.Z.1 and H2A.Z.2, which differ by only three amino acids. With such minimal variation in primary protein structure, the hypervariants had likely been considered as one functional entity. However, from literature searches, there were hints that H2A.Z.2 function was not redundant. Specifically, H2A.Z.1 homozygous knockout mice are embryonic lethal; therefore, H2A.Z.2 function cannot compensate to ensure survival. As transcriptional regulation by histone H2A.Z is relevant to brain processes, such as memory formation and consolidation, I sought to distinguish the differences between H2A.Z hypervariant function.”

“First, we used single-molecule fluorescence in situ hybridization and confirmed that both H2A.Z isoforms are expressed in the late embryonic rat brain. It was difficult to refine the knockdown strategy because the hypervariants differ by only three amino acids. Also, both genes have been duplicated during evolution and have multiple mammalian “gene copies” that have variable noncoding regions despite having the same coding region. After a lot of work, we found short hairpin RNAs (shRNAs) targeting the coding region that efficiently knocked down each hypervariant independently. We then performed a genome-wide microarray analysis of RNA to determine the impact of individual hypervariant knockdown on basal levels of neuronal gene transcription in dissociated rat cortical neurons.”

“When I started my lab, I had an assumption that I could pursue the research projects that I found the most interesting. But the reality was that external incentives, such as funding and institutional expectations, drove my research towards a goal of high productivity…We all have great ideas as scientists; however, choosing which project to pursue first is a dilemma that any new independent investigator will face. ”

“We found that H2A.Z.1 and H2A.Z.2 regulate the basal expression of largely nonoverlapping gene sets. Our microarray analysis revealed that 338 and 271 genes were differentially expressed due to the depletion of H2A.Z.1 or H2A.Z.2, respectively. Only 24 genes were sensitive to knockdown of either H2A.Z hypervariant. Functional gene ontology analysis indicated that target genes of H2A.Z.1-mediated transcriptional regulation are related to synaptic function, and several candidate genes linked to psychiatric disorders. Our electrophysiological analyses showed that depletion of either hypervariant led to alterations in mini excitatory postsynaptic currents in dissociated rat cortical neurons. We also examined the transcriptional regulation of the immediate-early gene Arc because we had previously observed that its promoter and transcriptional start site regions are enriched with H2A.Z-containing nucleosomes. Arc was also known to be regulated by H2A.Z in some memory processes. Overall, we found that Arc transcription requires both H2A.Z.1 and H2A.Z.2. However, depletion of either hypervariant had unique effects on Arc transcriptional kinetics.”

“Relevant also to fields such as cancer research, this paper highlights that proteins of high structural similarity may not perform redundant biological functions. Several instances occur in nature where genes duplicated during evolution encode very similar protein products that have achieved functional diversity. Because mechanisms that work in nature are often preserved, we had reasoned that the three amino acid differences in these hypervariants might be enough to allow functional diversity. All three variant amino acid residues reside in functionally pertinent regions, thereby making them suitable to mediate alternative actions.

Another interesting finding was that several traditional “rescue” attempts involving expression of shRNA-insensitive H2A.Z.2 failed to reverse the loss of Arc transcription in H2A.Z.2-depleted neurons. For a while, I was at a loss to understand why. While I was on vacation in Arizona, I suddenly had the thought that we should try co-depleting the ANP32E chaperone that removes H2A.Z from nucleosomes, as H2A.Z remains in the chromosome as the histone octamer but also exists in a free state. Similar to another study by others, we then showed that co-depletion ANP32E chaperone rescued the Arc transcriptional phenotype in H2A.Z.2-depleted neurons. That served as a reminder to believe in the data we were collecting, and to broaden our scientific thought processes in terms of other regulatory molecules that could contribute to the phenotypes we observe.”

What were some of the challenges you faced as a new independent investigator?

“When I started my lab, I had an assumption that I could pursue the research projects that I found the most interesting. But the reality was that external incentives, such as funding and institutional expectations, drove my research towards a goal of high productivity. I had to focus on one project that would be the most efficient for a first publication as a senior author. We all have great ideas as scientists; however, choosing which project to pursue first is a dilemma that any new independent investigator will face. Ultimately, I did choose the project that I was most interested in and funded for, but the path towards my first senior author publication—this paper—was not easy. Another challenge as a new investigator is to determine how much data should be included in a manuscript; I remember feeling that I want to impress the reviewers, and we included a lot of data in the first submission. In retrospect, I feel that we could have submitted the paper sooner. Knowing where to draw the line in each project before submitting a manuscript is a mindset that I am still developing.”

“At the Society for Neuroscience annual meeting 2019, I visited the “Meet the Editors” booth to discuss another project that I am preparing to submit for publication. I found the editors from both eNeuro and the Journal of Neuroscience very approachable, and I received constructive feedback and advice. ”

“I think that the eNeuro review process is very fair, prompt, and helpful to early career researchers. I first submitted the manuscript to the Journal of Neuroscience. The reviewers’ comments were both constructive and affirmative overall, but we received an editorial rejection with the recommendation to transfer the manuscript to eNeuro. We addressed the comments from the Journal of Neuroscience reviews and resubmitted the manuscript; the paper was accepted without external review. At the Society for Neuroscience annual meeting 2019, I visited the “Meet the Editors” booth to discuss another project that I am preparing to submit for publication. I found the editors from both eNeuro and the Journal of Neuroscience very approachable, and I received constructive feedback and advice. I would encourage other early career researchers to avail of the opportunity to discuss research one-on-one with a Reviewing Editor or Editor-in-Chief.”

Have you received any feedback about this study?

“I was not very active on social media when this paper was published. However, many colleagues contacted me to say that they had seen the paper. I am pleased that the paper has been cited by several researchers in neuroscience and other fields. This type of professional feedback is also a testament to the exposure that publishing in a society journal such as eNeuro provides.”