Lydia Strattan is currently a graduate student in the Department of Neuroscience at the University of Kentucky.

Spinal cord injury (SCI) severs descending axons that transmit impulses from the brain to pools of motor neurons in the spinal cord. This disruption of axonal projections leads to motor impairments at and below the level of the lesion. When people hear the words “spinal cord injury,” they often think of limb paralysis and the use of wheelchairs. However, loss of motor control after SCI affects much more than the ability to walk. The majority of spinal cord injuries occur at the cervical level1, which can lead to serious breathing deficits. People who lose the ability to breathe independently require mechanical ventilation, which negatively impacts life expectancy, as well as quality of life. One approach to restore motor function after SCI is to enhance the regeneration of injured axons through the injury site. However, many barriers to regeneration exist in the injured spinal cord. For example, neuronal-intrinsic mechanisms, including limited expression or reduced activation of pro-regenerative transcription factors, and extrinsic factors, such as the physical barrier formed by the glial scar and extracellular matrix molecules, can all limit the capacity for regeneration 2–4.

Urban, Ghosh, and colleagues targeted PTEN (phosphatase and tensin homolog) as an experimental approach to increase the regenerative potential of injured axons after cervical SCI. After central nervous system injury, PTEN negatively regulates the activity of the mTOR (mammalian target of rapamycin) pathway in damaged axons, thereby limiting their regenerative capacity5,6. However, the regenerative potential of injured axons can be restored to a great extent after experimental SCI by conditional deletion of PTEN in mice7. Unfortunately, continuous, systemic inhibition of PTEN is not a feasible treatment for neurological disorders in humans due to the risk of tumor formation. To increase the translatability of PTEN inhibition as a therapeutic intervention, the authors used a PTEN antagonist peptide (PAP4) that crosses the blood–brain barrier and can be administered for a set amount of time.

PAP4 was administered in a rodent model of high cervical SCI to determine its efficacy in enhancing axon regeneration and restoring respiratory function after SCI. Adult female rats were subjected to a lateral C2 hemisection, in which all fibers were severed at the C2 level in one half of the spinal cord, leading to paralysis of the ipsilateral hemidiaphragm. Although the diaphragm is the main muscle for breathing, the intact hemidiaphragm that is contralateral to the injury is sufficient to avoid the need for mechanical ventilation. Control rats underwent laminectomy only with no hemisection. Three days after injury (hemisection), rats received twice-daily subcutaneous injections of DMSO as control or PAP4 for three weeks. Eight weeks post-injury, electromyography (EMG) recordings were performed in the dorsal, medial, and ventral subdivisions of the diaphragm during normal breathing. EMG data demonstrated that the PAP4-treated rats had significantly greater functional recovery than the rats that received control DMSO (Figure 1).

The authors then investigated whether the recovery of breathing in PAP4-treated rats was mediated by axonal regeneration through the lesion or by sprouting of fibers that were spared by the lesion. To test this, an anterograde tracer, AAV2-mCherry, was injected into the rostral ventral respiratory group (rVRG) two weeks post-injury. Axons projecting from the rVRG descend to the C3–C6 level and synapse on phrenic motor neurons (PhMNs), which control contraction of the diaphragm. The C2 hemisection disrupts these descending pathways, leading to diaphragm paralysis. Axon tracing at eight weeks post-injury revealed that PAP4 treatment not only increased regeneration through the lesion (Figure 2A) but also led to the formation of putative excitatory synaptic connections on PhMNs labeled by intrapleural injection of cholera toxin B (Figure 2B–I). 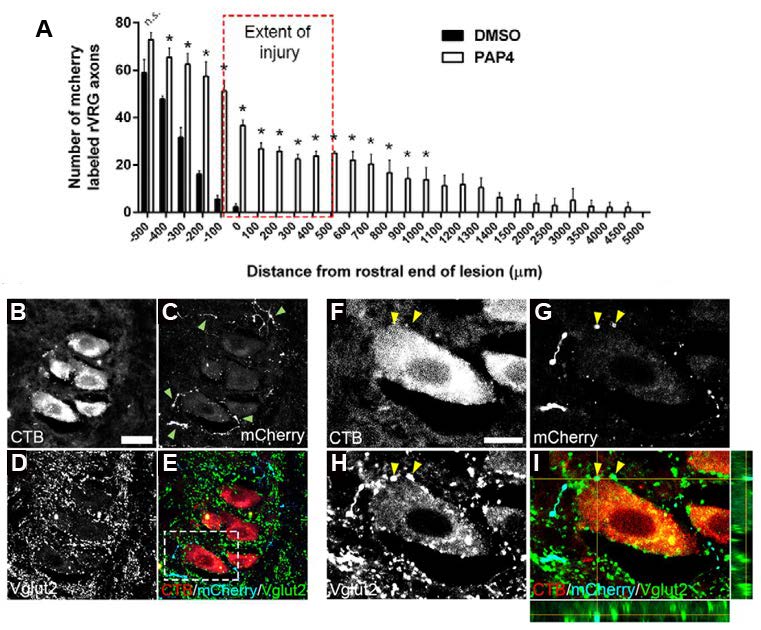 Figure 2. Ipsilateral rVRG axons regenerated through the lesion and formed putative synaptic connections with PhMNs. At eight weeks after injury (injury extent indicated by red dashed box in A), sagittal sections of the cervical spinal cord were examined for growth of mCherry-labeled axons originating in the ipsilateral rVRG at multiple locations relative to the lesion. Quantification of mCherry-labeled rVRG axon growth in rostral-to-caudal bins of 100 μm using the rostral end of the lesion as the starting point (A). mCherry-labeled rVRG fibers were able to regenerate into and through the lesion and then back into the intact caudal spinal cord in PAP4-treated rats, but not the DMSO-treated controls. Confocal imaging shows that regenerating mCherry+ rVRG axons (C, E, G, I; arrowheads in C) formed putative VGLUT2+ excitatory synaptic connections (D, E, H, I) with cholera toxin B-positive (CTB+) PhMNs retrogradely-labeled from the ipsilateral hemidiaphragm (B, E, F, I). Orthogonal projection shows mCherry+/VGLUT2+ excitatory rVRG axon terminals located directly presynaptic to the soma of CTB+ PhMNs in the C3 spinal cord (I; arrowheads in F–I). Dotted box in panel E denotes location of panels F–I. No mCherry-labeled rVRG fibers were found at all in the ipsilateral PhMN pool of DMSO-treated controls (not shown). *p < 0.05 compared with DMSO treatment; scale bars: 50 μm (B–E), 30 μm (F–I). (Adapted from Figure 5 in Urban et al., 2019.)

To confirm that the recovery of diaphragmatic function was due to axon regeneration through the hemisection and not sprouting of contralateral fibers that were spared by the lesion, contralateral rVRG axons were labeled with mCherry in a separate experiment. PAP4 treatment did not increase sprouting from contralateral rVRG fibers. Additionally, re-lesion through the site of the hemisection abolished functional recovery. Together, these experiments indicate that PAP4 treatment leads to increased axonal regeneration through the lesion site. These axons are capable of forming excitatory synaptic connections with PhMNs, leading to a recovery of breathing function.

This publication is an advance in the field because Urban, Ghosh, and colleagues demonstrate that the elimination of intrinsic barriers to axonal growth is capable of promoting axonal regeneration without altering extrinsic factors, such as the glial scar. The results also contribute to knowledge about how breathing circuitry changes after injury and reveal which cell populations and fibers are necessary for the recovery of breathing. Along with the growth of rVRG axons, PAP4 treatment also increased serotonergic innervation caudal to the lesion, which may be necessary for modulating the observed phrenic motor neuron activity after injury. The authors’ findings lend support to the importance of transient PTEN inhibition as an approach for developing potential treatment strategies for human SCI.