David Graykowski is currently an undergraduate student in neuroscience at the Department of Health Sciences, DePaul University, Chicago, IL.

Neurogenesis persists throughout adulthood in the hippocampus, a brain region involved in memory and learning. Perturbation of adult hippocampal neurogenesis is thought to hamper the recovery of memory observed in Alzheimer’s disease (AD) and other neurological disorders. However, the molecular machinery underlying adult hippocampal neurogenesis has not been fully elucidated, thus preventing possible prophylactic measures. The hippocampus includes multiple areas and layers, in particular the subgranular zone (SGZ), granular cell layer (GCL), and molecular layer in the dentate gyrus. Microarray analyses of dentate gyrus neural stem and progenitor cells (NSPCs; type 1) showed that upregulation of apolipoprotein E (ApoE) expression in these cells coincides with postnatal neurogenesis in mice1. Furthermore, the absence of ApoE expression reduces the neural progenitor pool in the postnatal dentate gyrus2. ApoE is a polymorphic gene resulting in three isoforms: ApoE2, ApoE3, and ApoE4. ApoE3 is thought to be the wild-type (WT) allele, because it is present in >50% of the general human population, whereas the ApoE2 allele is rare in the population and is considered to be neuroprotective against AD3. The ApoE4 allele is the greatest genetic risk factor for late-onset AD4 and related cognitive deficits. Therefore, ApoE4 is a promising therapeutic target for several disorders that involve hippocampal dysfunction. Tensaouti and colleagues compared adult hippocampal neurogenesis between wild-type (WT) and ApoE-knock-out (KO) mice and between targeted replacement mice in which the endogenous murine gene was replaced with human ApoE3 or ApoE4 alleles.

Tensaouti and colleagues determined whether the absence of ApoE expression affects cell survival and differentiation into mature neurons in the dentate gyrus. Six-week-old WT and ApoE-KO mice were injected intraperitoneally for three consecutive days with bromodeoxyuridine (BrdU), a thymidine analog that is incorporated into proliferating cells. Brains were harvested four weeks later to permit sufficient time for neuronal differentiation to occur. Immunoreactivity for BrdU and Prox1, a marker of mature hippocampal neurons, was examined in the SGZ and GCL of the dentate gyrus using an unbiased stereological approach. The total number of BrdU-positive (BrdU+) cells and BrdU+ cells that were also Prox1-positive (BrdU+/Prox1+) were quantified. The authors found no difference in the total number of single- or double-positive cells between WT and ApoE-KO mice. In addition, the percentage of BrdU+ cells that expressed Prox1 was similar between both groups. Compared to ApoE3 mice, ApoE4 mice did not exhibit differences in the number of BrdU+ cells or BrdU+/Prox1+ cells. Together, these results indicate that cell survival and neuronal differentiation is not affected by the loss of ApoE expression or the presence of the Apo4 isoform.

The authors then investigated whether ApoE specifically affects the activation of type 1 NSPCs in the SGZ. Immunofluorescence staining was performed on sections from 10-week-old WT and ApoE-KO mice for markers of progenitor cells (nestin), proliferating cells (Ki67), and astrocytes (glial fibrillary acidic protein; GFAP). Compared to WT mice, ApoE-KO mice exhibited a significantly reduced number of Ki67-positive cells, nestin-GFAP double-positive cells, and nestin-GFAP-Ki67 triple-positive cells (Figure 1). Collectively, these findings show that the absence of ApoE expression results in reduced NSPC proliferation, attributable to a lower total number of NSPCs. This change in proliferation was not detected by BrdU, which was administered four weeks earlier when ApoE is not required for maintenance of the NSPC population. Interestingly, when the authors performed the Ki67, nestin and GFAP immunofluorescence on sections from ApoE3 and ApoE4 mice, no significant differences in the number of single-, double- or triple-positive cells were observed. In summary, these experiments support the requirement of ApoE to maintain sufficient healthy NSPC function to adequately generate adult-born hippocampal neurons. However, the authors found that the presence of the ApoE4 isoform is not unfavorable for this particular process. 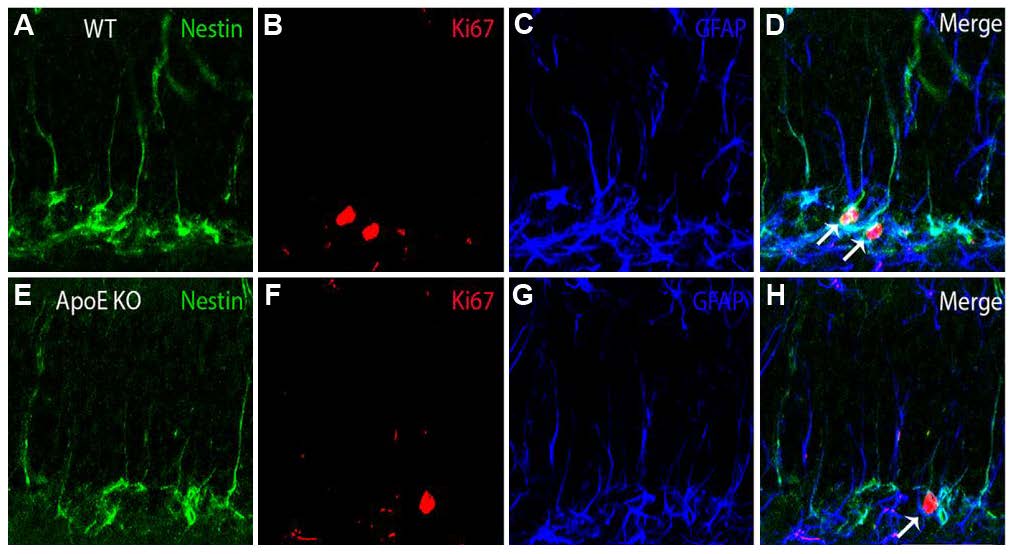 As ApoE is secreted by astrocytes, which have close connections to neurons, the authors determined if ApoE influences the maturation of adult-born neurons in the GCL. To this end, 6-week old WT and ApoE-KO mice were injected in the dentate gyrus with a green fluorescent protein (GFP)-expressing retrovirus. Four weeks later, the brains were harvested for analysis of dendritic morphology and spine density. Loss of ApoE expression did not affect the expected location of neurons within the GCL or length between the cell body and the first dendritic branch. However, compared to WT mice, ApoE-KO mice exhibited a reduction in neuronal dendritic nodes, span, and quantity at distances 50-150 μm from the cell body. The phenotype of ApoE4 neurons was distinct from that of ApoE3 neurons, with dendritic morphology resembling ApoE-KO neurons. Additionally, the authors furthered these findings by Scholl analysis in which reconstructed neurons were divided as a function of dendritic nodes (branching off points). On average, ApoE-KO and ApoE4 neurons had a high proportion of neurons with low node count and reduced spine density compared to WT and ApoE3 neurons, respectively (Figure 2). These results suggest ApoE plays an important role in dendritic complexity in the granule cell layer. 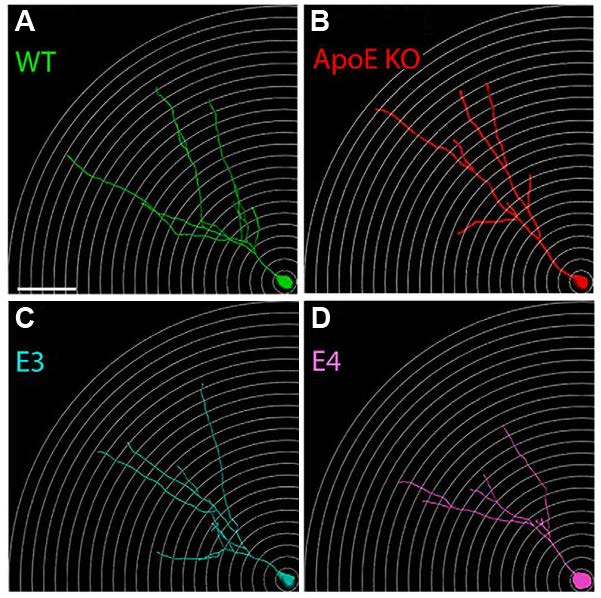 This publication is an advance in the field because Tensaouti and colleagues provide evidence for different effects of ApoE isoforms on the proliferation of neural progenitor cells and neuronal maturation in the hippocampus. These results add to a body of evidence showing aberrant functions of ApoE4 compared to the ApoE3 isoform. As the endogenous functions of ApoE also include lipid transport and the maintenance of cholesterol homeostasis in the mammalian brain, ApoE isoforms have been studied in relation to different aspects of AD or other neurological pathologies. For example, research has shown that ApoE is an important proteolytic degradative entity of amyloid-beta; the ApoE4 isoform shows a decreased degradation capacity compared to ApoE3, whereas ApoE3 is similar to WT5. ApoE isoforms also show variation in the ApoE receptor binding efficacy in neurons generated from human embryonic stem cells6. Gene editing of human-induced pluripotent stem cells from an ApoE4/ApoE3 to an ApoE3/ApoE3 genotype resulted in reduced cell death compared to unedited cells7. The current findings of Tensaouti and colleagues lay the groundwork to potentially manipulate ApoE isoforms to mitigate hippocampal-related defects relevant to cognitive function. Future studies should investigate the effects of ApoE isoforms in older mice and over longer periods. Increased knowledge of the molecular mechanisms that regulate adult hippocampal neurogenesis will not only be useful for AD but other neurological disorders such as schizophrenia. The authors have recently published their findings on the role of ApoE isoforms in adult hippocampal neurogenesis in a mouse model of traumatic brain injury8.