Shelby White is currently a doctoral candidate at Indiana University – Purdue University Indianapolis, IN, whom you can follow on Twitter @ShelbyMWhite1

Alcohol Use Disorders (AUDs) pose a large financial and health burden on society. Increasing evidence has identified withdrawal-induced anxiety as a major contributing factor to the relapse of pathological alcohol use. Understanding alcohol withdrawal-related alterations in the neurocircuitry involved in emotional regulation is essential for the development of treatments for AUDs. The prefrontal cortex to basolateral amygdala (PFC–BLA) circuit is of particular interest to AUD and anxiety research as the PFC is an area essential for executive function, whereas the BLA is highly implicated in emotional processes such as fear and anxiety. Specific subregions of the medial PFC (mPFC) differentially regulate top-down control mechanisms over BLA signaling. mPFC subdivisions include the dorsal mPFC (dmPFC; prelimbic cortex [PL]), and the ventral mPFC (vmPFC; infralimbic cortex [IL]). McGinnis and colleagues identify novel and divergent roles for dmPFC–BLA and vmPFC–BLA circuits in the regulation of anxiety associated with alcohol withdrawal in rats.

The authors used optogenetic and chemogenetic approaches to manipulate excitatory (glutamatergic) projections from the mPFC to the BLA; approximately 85% of neurons in the BLA are excitatory projection neurons that receive glutamatergic input. Viral constructs were injected bilaterally into either the dmPFC or vmPFC of ~5-week-old rats to permit expression of the virus before electrophysiological and behavioral experiments were initiated at ~10 weeks of age. An inhibitory chemogenetic virus (AAV5-CamKIIα-hM4D(Gi)-mCherry) and an excitatory optogenetic virus (AAV5-CamKIIα-hChR2(H134R)-EYFP) were used to target monosynaptic glutamatergic projection neurons terminating in the BLA. Rats injected with the inhibitory chemogenetic virus underwent a second surgical procedure four weeks after the first procedure to implant cannulae bilaterally targeting the BLA to allow for microinjections of Clozapine N-oxide (CNO). CNO is the drug used to activate the hM4D(Gi) DREADD (Designer Receptors Exclusively Activated by Designer Drugs) to directly inhibit dmPFC or vmPFC projections to the BLA.

Chronic intermittent ethanol (CIE) exposure in vapor chambers is a well-known paradigm for inducing alcohol dependence and subsequent withdrawal in rodents. For 3 or 7 days of CIE, rats were exposed daily to 12 hours of ethanol (EtOH) and 12 hours of air (Figure 1A). The control groups were exposed to air only. Patch-clamp electrophysiological recordings were conducted in BLA slices collected 24 hours post-EtOH or air exposure. Recordings from BLA principal neurons were performed while simultaneously stimulating dmPFC/vmPFC projections along the stria terminalis that expressed the excitatory opsin (ChR2). Paired-pulse ratio (PPR) was used to estimate the probability of presynaptic glutamate release. Two pulses of light stimulation elicited excitatory responses; PPR was calculated as the ratio of the peak amplitude of the second response to light (P2) compared to the first response (P1). An increase in PPR indicates a greater probability of presynaptic glutamate release. The authors found that glutamate release probability differed between the dmPFC and vmPFC for air-exposed control animals (Figure 1 B-E). This observation suggests underlying differences in top-down control over the BLA for these subregions. After 3 days of CIE and withdrawal (3-day CIE/WD), no difference in PPR was observed for dmPFC or vmPFC terminals in the BLA (Figure 1B,D). However, bidirectionally modulated glutamate release probability in the BLA occurred following 7-day CIE/WD. Stimulating dmPFC or vmPFC terminals resulted in increased or decreased glutamate release probability, respectively (Figure 1C,E). These findings, along with additional results presented in the publication, suggest that synaptic plasticity is strengthened for the dmPFC–BLA circuit but weakened for the vmPFC–BLA circuit during withdrawal from 7 days of CIE. 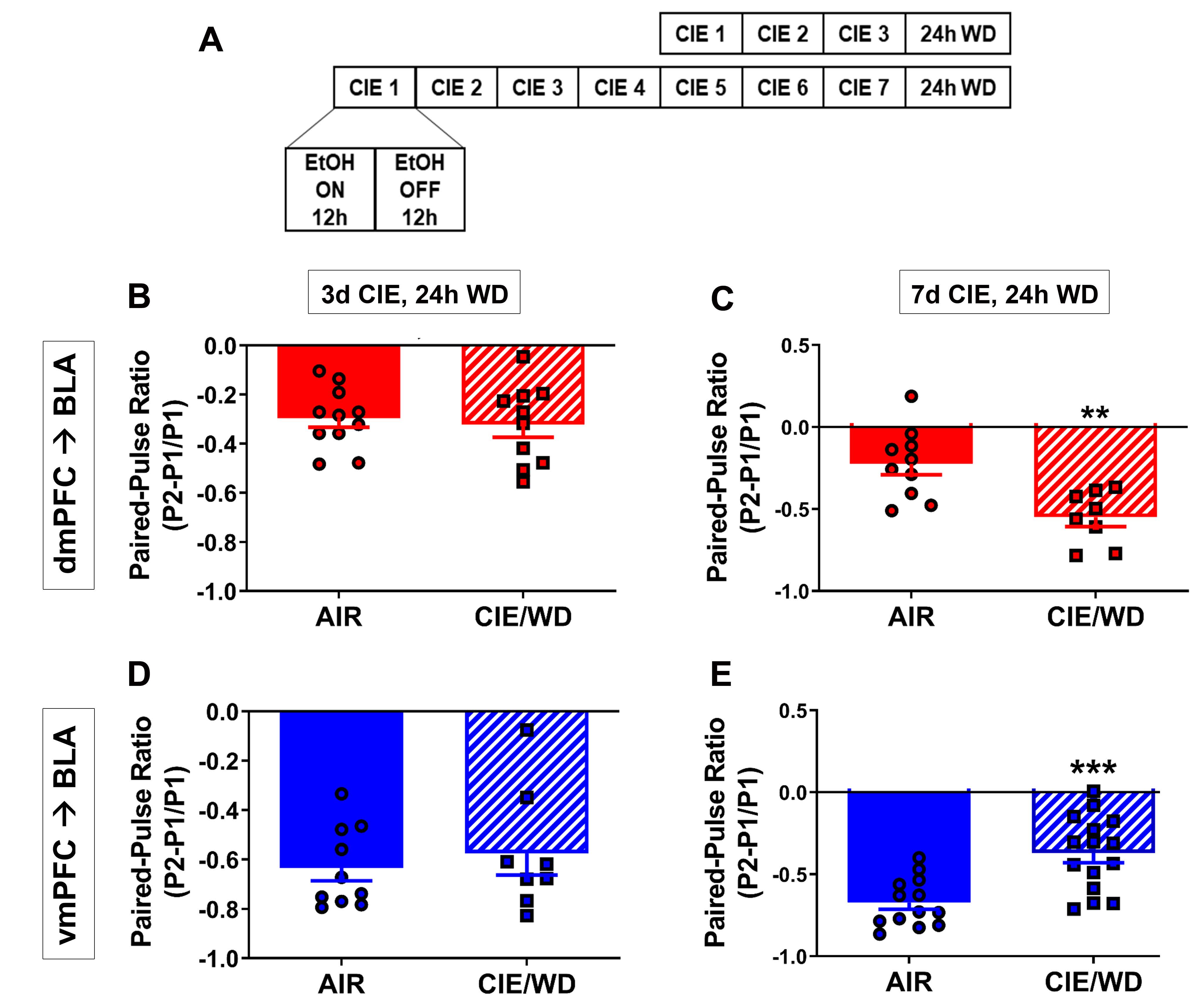 Increased and decreased glutamate release in BLA has been associated with heightened and lowered anxiolytic states, respectively. Glutamatergic projections from the dmPFC and vmPFC to the BLA are thought to discretely modulate the excitatory/inhibitory (E/I) balance of the BLA. Therefore, the authors next used the elevated zero maze (EZM) as an indicator of anxiety-like behavior in CIE- versus air-exposed rats. The amount of time spent and/or entries in the open versus closed portions of the EZM is determined during a defined time; more time spent in open portions of the maze indicates lower anxiety-like behavioral levels. CNO or artificial cerebrospinal fluid (control) was microinjected into the BLA 24 hours post-EtOH or air exposure; then, the rats performed the EZM test. Following 7-day CIE/WD, rats (artificial cerebrospinal fluid in BLA; no chemogenetic inhibition) spent less time in the open arms of the EZM, indicating increased anxiety-like behavior, compared to air-exposed controls (Figure 5 in McGinnis et al., 2019). Microinjecting CNO into the BLA to inhibit dmPFC projections rescued this behavior and, interestingly, decreased movement for air-exposed controls (Figure 5 in McGinnis et al., 2019). These observations are consistent with the concept that increased glutamate release in the BLA produces increased measures of anxiety-like behavior. These findings relate the changes in synaptic strength of dmPFC–BLA projections to a behavioral phenotype.

McGinnis and colleagues also examined whether the bidirectional modulation of plasticity for dmPFC–/vmPFC–BLA circuits disrupts the E/I balance in the BLA, ultimately altering anxiety-like behavior as demonstrated by the EZM. E/I balance is important for controlling signaling output from the BLA via feedback and feedforward inhibition, which contributes to emotional regulation. To address this question, the balance of excitatory and inhibitory postsynaptic currents (EPSCs and ISPCs) signals evoked by optogenetically stimulating dmPFC terminals (ChR2) was assessed using patch-clamp electrophysiology following 7-day CIE/WD. The authors found that E/I ratios were differentially altered for dmPFC–BLA and vmPFC–BLA projections, with increased and decreased E/I ratios for dmPFC– and vmPFC–BLA circuits, respectively (Figure 2). These ratio differences were driven by a decrease in IPSC amplitude from dmPFC stimulation and an increase in IPSC amplitude from vmPFC stimulation in CIE rats during withdrawal. Therefore, 7-day CIE/WD differentially alters synaptic plasticity in dmPFC– and vmPFC–BLA circuits, which results in altered recruitment of GABAergic circuits that regulate BLA signal output.

This publication is an advance in the field because McGinnis and colleagues demonstrate a novel role for inputs from mPFC subregions to the BLA in the maintenance of anxiety-like behavior during alcohol withdrawal in rats. In summary, the authors found that 7-day CIE/WD differentially regulates synaptic mechanisms by strengthening (dmPFC) or weakening (vmPFC) connections to the BLA. As a result, there is a disruption in the E/I balance of the BLA and, consequentially, the regulation of anxiety-like behaviors. These results provide valuable insights into the understanding of how mPFC–BLA circuits bidirectionally alter emotional regulation during alcohol withdrawal. Future research may find ways to manipulate these circuits to combat the anxiety and relapse associated with alcohol addiction. Indeed, a future direction of research in Professor Brian McCool’s lab (Wake Forest School of Medicine, Winston-Salem, NC) is to investigate the molecular mechanism of CIE-induced changes in synaptic plasticity that occur in dmPFC–/vmPFC–BLA circuits.