Beyond the Paper: A Conversation with Alexandra Castillo-Ruiz and Nancy Forger

The importance of neuronal cell death for brain development has been recognized for decades, but what regulates its timing or accounts for differences in the amount of cell death between brain regions was unknown. In many species, including humans and mice, developmental cell death occurs perinatally and eliminates approximately half of the neurons initially generated. It is possible that the timing of neuronal cell death is developmentally programmed and is only coincidentally associated with birth. Alternatively, birth may play a role in shaping cell death. To test these competing hypotheses, the authors experimentally advanced or delayed birth by 1 d in mice (within the normal range of gestation for the species) and examined effects on the temporal pattern and magnitude (amount) of neuronal cell death, using immunohistochemical detection of activated caspase-3 as a cell death marker. To detect the effects of subtle changes in birth timing, the authors focused on brain areas that exhibit sharp postnatal peaks in cell death. In their publication, Castillo-Ruiz and colleagues demonstrate that advancing birth by one day advances patterns of cell death but does not advance overall forebrain growth in mice. However, a delayed birth does not result in a corresponding delay in cell death. Thus, birth can advance cell death, but if postponed, a developmental program governs. Birth timing also affects the magnitude of cell death in a region-specific manner, suggesting that birth has important, previously unrecognized effects on brain development. As humans routinely alter birth timing—usually to advance birth—the authors’ findings may have implications for future recommendations for obstetric practices. 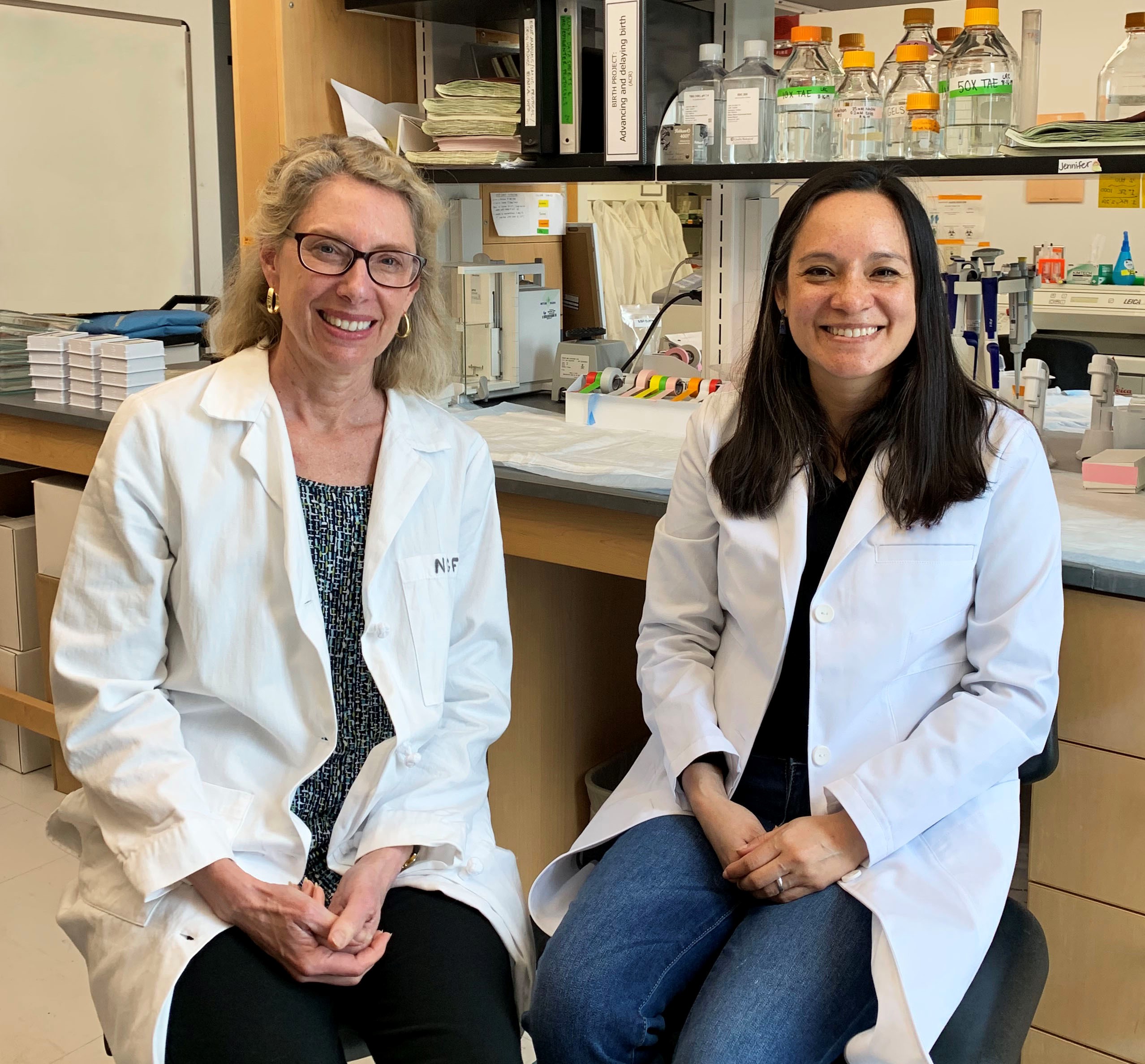 Alexandra: “Birth is such a dramatic event for a newborn. It is known that fetal peripheral organs prepare for birth, but not much was known about how the fetal brain responds to birth. Previous studies in the Forger lab reported a spike in cell death after birth in different brain regions in mice. These observations led us to two hypotheses: cell death is regulated by 1) the process of birth or 2) a developmental program. We tested both hypotheses by manipulating the timing of birth using exogenous reproductive hormone administration or an antagonist of reproductive hormone receptors. Birth typically occurs at 19 d postconception (dpc) in the C57BL/6 mouse strain. Therefore, early (18 dpc) and late (20 dpc) births were compared with on-time (19 dpc) births for which we did not manipulate birth timing. We manipulated birth within a short window (18–20 dpc) to avoid confounds associated with prematurity and postmaturity. We focused our analyses on two brain regions that exhibit discrete neonatal peaks in cell death—the CA1 oriens layer of the hippocampus (CA1or) and the shell of the nucleus accumbens (NAcc).”

Nancy: “We have been studying neuronal development and cell death for many years. I approached this study with an interest in understanding what controls the timing of cell death, whereas Alex was particularly interested in the effect of birth on the fetal brain. We have known for decades that developmental cell death, which occurs perinatally, eliminates about half of the neurons that are initially generated. We previously published a cell death “atlas” of the mouse brain in which we quantified apoptotic cells, immunopositive for activated caspase-3, in over 20 forebrain regions prenatally and postnatally (Ahern et al., 2013; Mosley et al., 2017). Cell death peaked right after birth in several brain regions, such as CA1or and the NAcc. Therefore, we wanted to determine if there is a relationship between when an animal is born, and when neurons in these brain regions die.“

Alexandra: “We reviewed the literature to find how we could best control the timing of birth without altering other aspects of pregnancy too much. We considered hormonal manipulation the best approach. Progesterone levels peak during late pregnancy, then decline before birth. We tried a few approaches to alter progesterone levels until we could control the timing of birth consistently. To advance birth by one day, we injected dams with RU-486, an antagonist of both progesterone and glucocorticoid receptors, whereas exogenous progesterone was used to delay birth by one day. In terms of technical considerations, it was important not to stress the heavily pregnant dams during handling or injection of RU-486/progesterone. We contacted two experts in perinatal research, Dr. Jeffrey Reese and Naoko Boatwright, MS (Vanderbilt School of Medicine, Nashville, TN), who very kindly sent us a video demonstration of the appropriate injection procedure for the pregnant dams. At the Society for Neuroscience meeting 2017, I received great feedback about my preliminary results from Dr. Matthew Paul (SUNY Buffalo), who recommended that we test the acute effects of the drugs on cell death in the fetal brain.”

“As we showed in this eNeuro paper, birth is an orchestrator of brain development. My current research focuses on teasing apart which aspects of birth influence perinatal cell death.”

What were the main findings in this paper?

Alexandra: “We found that advancing birth by a day advanced the pattern of cell death in the two brain regions that we examined. We were surprised that when we delayed cell death, a developmental program took over. In addition, by altering the timing of birth, we also saw changes in how much cell death occurred in the CA1or and the NAcc. Forebrain volume was related to postconceptional age, rather than an advancement or delay of birth timing. We have also previously published on the influences of birth delivery mode and perinatal microbiota exposure on neonatal cell death in mice (Castillo-Ruiz et al., 2018a,b). Therefore, many factors contribute to the timing and magnitude of cell death, and the current findings have opened up a new avenue of research for us.”

Why is this paper an important contribution to the field?

Nancy: “There was a dearth of knowledge regarding the potential contribution of extrinsic factors associated with labor, parturition, and/or the transition to ex utero life on perinatal neuronal death. What is particularly interesting about the main finding is our initial two competing hypotheses both turned out to be correct. Further research using this model of birth timing manipulation will be useful to determine whether advanced timing of cell death would lead to an uncoupling with other developmental trajectories. The duration of the cell death period is compressed in rodents compared to humans. Therefore, any potential implications for obstetrics are unknown at this time but should be investigated.”

“For the first time in my 30-year career, I wrote the staff a thank you letter saying that I have never had such a good review experience. The reviews were fast, professional, thorough, and eNeuro helped a lot to publicize the paper.”

Nancy: “For the first time in my 30-year career, I wrote the staff a thank you letter saying that I have never had such a good review experience. The reviews were fast, professional, thorough, and eNeuro has helped a lot to publicize the paper.”

Alexandra: “Publishing with eNeuro was a great experience.”

Nancy: “Each student has their personal needs as far as mentoring is concerned; therefore, I adjust my mentoring and input to each individual. I think it is important to give trainees the space to develop their ideas and problem solve. When students join my lab, they are typically presented with a choice of projects. As long as each project is done well, I believe there are no bad data. Often a project may not go the way we thought, but even negative data can turn out to be a terrific and precise control for when we finally uncover an experimental effect.”

Alexandra: “In 2014, I joined Nancy’s lab as a post-doc, and I am here six years later, so I really enjoy the lab and her mentorship. I currently hold a non-tenure track Assistant Professor position, and I would like to start my own lab. As Nancy is the Director of the Neuroscience Institute, I help to mentor several graduate and undergraduate students. In particular, with undergraduate students, I like to take them through the data collection and data analysis processes. The students present their research in our weekly lab meeting and at STEM events at Georgia State University throughout the year.”

Alexandra: “I love science, so I do plan to remain in academia and start my own lab in the future. As we showed in this paper, birth is an orchestrator of brain development. My current research focuses on teasing apart which aspects of birth influence perinatal cell death. For example, we are determining whether colonization of the perinatal brain by microglia could impact neuronal cell death.”

Nancy: “We have also started a large project to look at how the exposure to microbes at birth affects neonatal brain development. Our focus is on the first few days after birth, which is when the organism is first exposed to a complex microbiota.”