Dr. Lesnak is currently a PhD student in the Department of Physical Therapy and Rehabilitation Science at the University of Iowa, Iowa City, IA.

Chronic use of morphine and other opioid drugs can lead to the development of opioid tolerance, which decreases their analgesic effect. Thus, higher doses of prescription opioids may be taken to obtain pain relief, which ultimately heightens the risk of suffering adverse side effects associated with opioids1. Research into the mechanisms of opioid tolerance could hopefully identify pharmacological targets to prevent or reverse the development of this phenomenon. The current opioid crisis is also exacerbated by the poor pain relief that opioids provide for neuropathic pain2 that follows nerve injury. Therefore, it is of immense clinical interest to determine the mechanisms that underlie opioid tolerance and opioid efficacy. Epidermal growth factor (EGF) receptor (EGFR), a receptor tyrosine kinase, can be activated by mu-opioid receptors and is involved in pain processing3,4. Prior research has shown that platelet-derived growth factor receptor-ß (PDGFR-ß) can interact with EGFR and that PDGFR-ß inhibition can block the development of opioid tolerance5,6. In their publication, Puig and colleagues investigated the effects of EGFR antagonism on opioid tolerance and neuropathic pain in rats.

First, the authors determined whether blocking EGFR signaling would reduce opioid tolerance, which manifests as a decrease in the analgesic effect of the opioid after repeated administration. By either intrathecal or systemic injection, four groups of adult male rats were administered one of the following for four consecutive days: 1) vehicle control, 2) morphine, 3) the EGFR inhibitor gefitinib, or 4) morphine and gefitinib. Over the four days, analgesic relief was measured daily by determining tail-flick latency (TFL)—how rapidly rats flicked their tail away from radiant heat emitted by a hot lamp. A longer TFL reflects an analgesic effect of morphine. As expected, rats with no pain relief—the control and gefitinib groups— quickly flicked their tail away from the heat source (Figure 1A,B). The TFL of rats that received morphine alone became progressively shorter from Day 1 to Day 4, indicating the development of opioid tolerance. Rats that were administered both morphine and gefitinib remained consistently long over the four days, demonstrating that morphine still provided analgesic relief when EGFR signaling was blocked. On Day 5, all experimental groups were administered morphine alone before the TFL assessment to determine if opioid tolerance had developed. Opioid tolerance developed in rats that received morphine alone. However, opioid tolerance was prevented when morphine was co-administered with gefitinib over the four-day administration period. Therefore, blocking EGFR signaling precluded the development of opioid tolerance. The authors also found that daily administration of EGF alone over four days led to morphine tolerance on Day 5 (Figure 1C). This morphine tolerance occurred without prior morphine exposure, a phenomenon the authors call “pre-tolerance.” Collectively, these results suggest that EGFR activation is required for the development of opioid tolerance, which can occur even without prior opioid exposure. 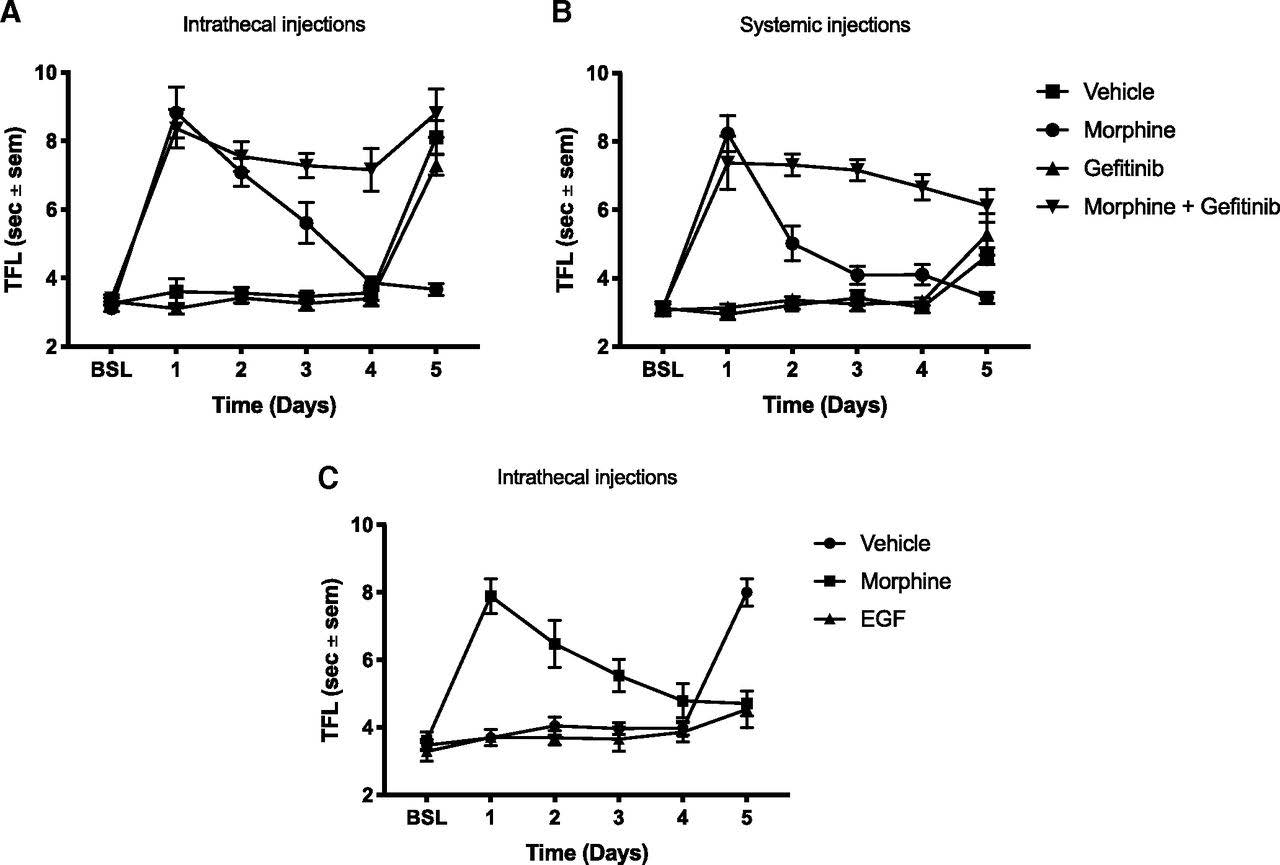 Figure 1. EGFR activation is both necessary and sufficient to cause morphine tolerance. A,B, Four days of intrathecal or systemic morphine administration results in tolerance to morphine alone delivered on Day five. Co-administration of the EGFR inhibitor gefitinib with morphine blocks the development of morphine tolerance. C, Four days of intrathecal EGF administration results in “pre-tolerance” to a subsequent injection of morphine on Day five. BSL, baseline; prior to the first injection. (Adapted from Figure 2 in Puig et al., 2020.)

Next, the authors investigated if EGFR activation contributes to the reduced efficacy of opioids for neuropathic pain. To test this possibility, the authors induced neuropathic pain in rats by an L5 spinal nerve ligation (SNL) and subsequently examined mechanical sensitivity using the von Frey filament assay. In this assay, tactile stimulation is applied to the hind paw using small nylon fibers to test for mechanical sensitivity. The assay determines the amount of force in grams required to elicit a pain response from the rat 50% of the time, with a lower force denoting heightened sensitivity. Following a two-week recovery after the ligation, mechanical sensitivity was assessed to confirm the occurrence of mechanical allodynia (heightened sensitivity to non-noxious stimuli). The rats then received daily intrathecal injections of either morphine, gefitinib, or the combination of morphine and gefitinib for five days. Mechanical allodynia was re-assessed 40 minutes after intrathecal injections. Morphine or gefitinib alone was unable to reverse the mechanical allodynia caused by the SNL. However, when morphine was co-administered with gefitinib, there was a complete reversal of the mechanical hypersensitivity following just one day of treatment. These results suggest that the reduced efficacy of morphine for treating neuropathic pain could be due to activation of the EGFR pathway.

The authors hypothesized that EGFR activation could be due to the presence of an EGF ligand being released from injured nerves or upon transactivation of the EGFR. Therefore, the authors next used an EGF scavenger construct (EGF-Fc) to test this hypothesis. Following a two-week recovery after SNL, rats received daily intrathecal injections of vehicle, EGF-Fc, morphine, or morphine and EGF-Fc for four days. Treatment with the vehicle, EGF-Fc, or morphine did not reverse the mechanical allodynia. However, when EGF-Fc was administered with morphine, SNL-induced mechanical allodynia was completely reversed. These results suggest that EGFR ligands are released following nerve injury, leading to the decreased effectiveness of morphine, similar to the pre-tolerance phenomenon demonstrated in the first set of experiments.

This publication is an advance in the field because it provides evidence that EGF plays a role in mediating the development of opioid tolerance. Also, the authors demonstrate that EGFR activity can lead to opioid resistance following a nerve injury. This research has elucidated the underlying mechanisms of opioid tolerance and resistance that could potentially lead to the development of pharmacological targets to treat opioid tolerance. Future directions should determine the downstream signaling mechanism in which EGFR signaling leads to morphine tolerance. In addition, future experiments could investigate if morphine and EGFR inhibitors are effective treatments in animal pain models other than neuropathic pain.