Huntington’s Disease (HD) is a neurodegenerative disorder that leads to pronounced motor defects and alterations in behavior and cognitive function. HD is caused by a CAG repetition in the gene that encodes the variant huntingtin (HTT) protein. Variant HTT is associated with aberrant excitatory neurotransmission, neurotoxicity, and, ultimately, the death of medium spiny neurons (MSNs) of the striatum. The neurodegeneration and death of MSNs results in the overt motor defects on which a diagnosis of HD (fully progressed) is typically based. However, individuals with HD exhibit cognitive defects and initial motor impairments at an early (premanifest) stage relative to conventional diagnosis.

Research in rodent models of HD has shown that physiological changes at MSN striatal synapses are present in fully progressed HD1,2. However, changes in NMDA receptor-mediated synaptic transmission are already evident in the early stages of HD5. NMDA receptor subunit composition changes affect excitatory transmission in several neurological diseases6. HD is associated with changes in expression of the GluN2B and GluN3A subunits of NMDA receptors3,4. However, it was unknown whether the alterations in NMDA subunit expression were related to early motor deficits. In their publication, Glangetas and colleagues examined whether aberrant synaptic plasticity may be responsible for, and serve as an early biomarker of, motor skill consolidation deficits in a mouse model of premanifest HD.

The authors also examined locomotor activity using the rotarod test. Mice were placed on a circular metal rod that rotated at an increasing number of revolutions per minute (Figure 1C). Compared to a short latency to fall off the rod, a longer latency demonstrates better motor skills. The mice were trained on the rotarod twice daily on days 1–4. No initial difference in learning ability was found between WT and premanifest YAC128 mice (Figure 1D). Testing on Day 7, however, showed that the latency to fall off the rod was shorter in premanifest YAC128 mice than WT mice (Figure 1D). These results further show that premanifest YAC128 mice demonstrate defects in motor skill consolidation, whereas initial learning of motor skills is not impaired in these mice. 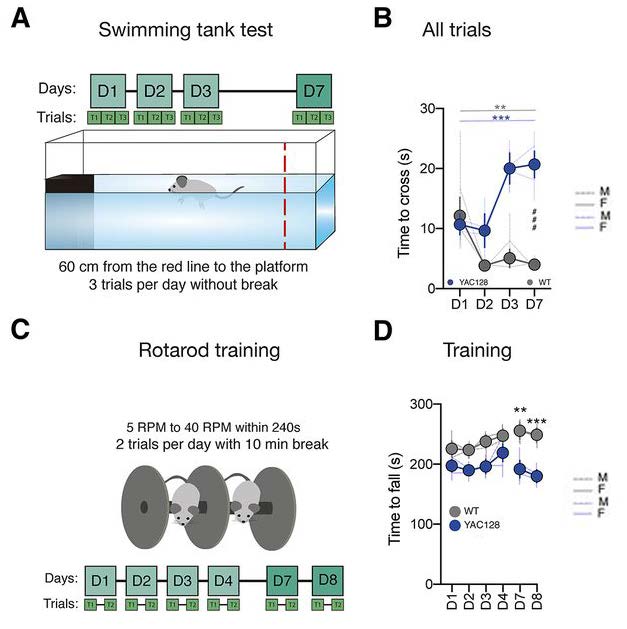 The authors next determined whether the physiological changes at NMDA receptors could be linked to the behavioral deficits in motor skill consolidation that were observed. The authors used the single pellet reaching task which requires fine motor coordination skills. As before, injection of a viral construct was used to visualize axonal projections from the motor cortex to the DLS (Figure 3A). On the last days of training, premanifest YAC128 mice were less successful at performing the single pellet reaching task than WT mice (Figure 3C). In WT mice, training on the single pellet reaching task decreased the AMPA/NMDA ratio at motor cortex to DLS synapses; surprisingly, this plasticity was not observed in the premanifest YAC128 mice (Figure 3C). The authors concluded that the consolidation-induced decrease in AMPA/NMDA ratio is occluded in these YAC128 mice. The AMPA/NMDA ratio at the motor cortex to DLS synapses in premanifest YAC128 mice is too low to support plasticity changes that normally occur during motor skill consolidation. Therefore, the authors concluded that motor cortex to DLS NMDA-mediated synaptic plasticity is necessary for the consolidation of newly acquired motor skills. Both the motor impairments and physiological alteration observed in premanifest YAC128  mice, therefore, serve as-early stage biomarkers of HD. 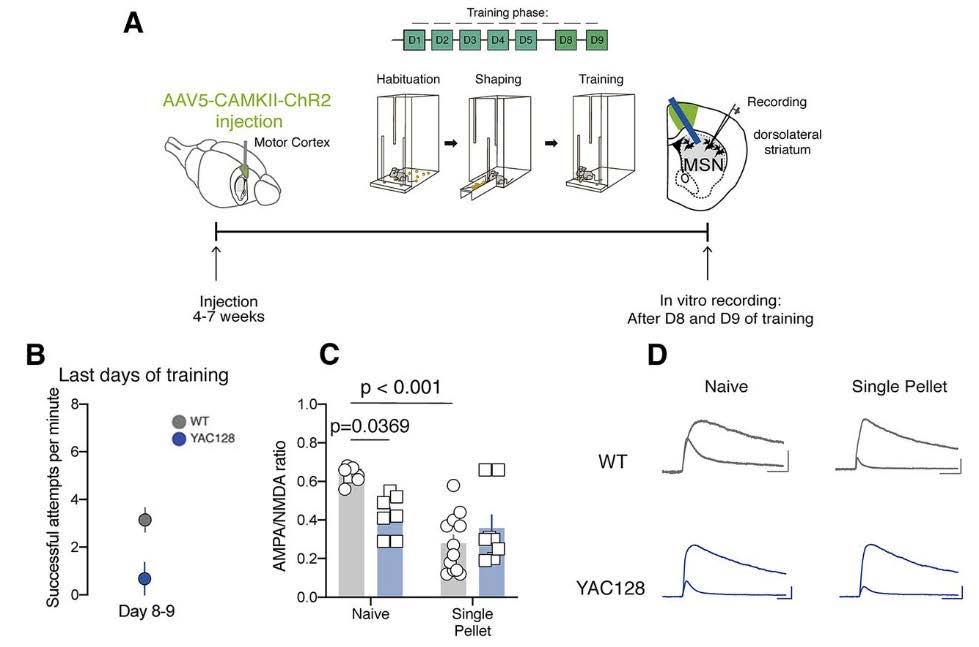 This publication provides important insights for both the HD and the motor learning research communities. The authors found locomotor behavioral and physiological changes that could serve as early biomarkers of HD in mice. The results serve as an exciting launch point for future work in early HD therapeutic intervention and also highlight the importance of motor cortex to DLS synapses for motor skill consolidation.