Beyond the Paper: A conversation with Dr. Jacqueline Barker

In their eNeuro publication, Barker et al., 2017 showed that during flexible, goal-directed actions, the infralimbic prefrontal cortex (IfL-C) encodes reinforcer delivery information. In contrast, during the performance of inflexible, habitual behavior, IfL-C encoding of action-outcome contingency information was attenuated. Inhibition of IfL-C selectively during this task epoch restored sensitivity to changes in contingency, suggesting that IfL-C activity can determine response strategy. These data provide novel insight into the precise neural functions that underlie the development and maintenance of habitual behavior and are expected to inform the development of treatment strategies for deficits in cognitive control over behavior. 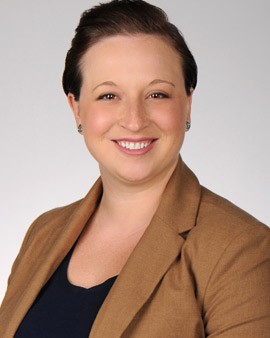 RC:  How did you become interested in this particular line of research?
JB: “This eNeuro paper arose from my post-doctoral research in Professor Judson Chandler’s lab (Medical University of South Carolina, SC). Research in Professor Chandler’s lab focuses on brain changes that result from exposure to environmental influences, such as drugs of abuse. As my undergraduate degree is in Psychology, I was also interested in how flexible, goal-directed behaviors can become maladaptive and lead to neuropsychiatric illnesses such as alcoholism. In college, I had originally intended to do a PhD in Psychology, but I transitioned to neuroscience because I felt my research interests at that time tended to have more questions than achievable answers. When I joined Professor Chandler’s lab, I had already gained experience in the experimental tools that could address mechanistic questions about behavior. Professor Chandler was extremely supportive of my interest in the role of the IfL-C in habitual behaviors, and he served as my mentor for a training-based award (NIAAA K99/R00) that funded a project for which I was the PI.”

What led you to investigate the role of the IfL-C in habitual behaviors?
“The IfL-C is one of my favorite brain structures because it is so interesting in terms of reward-seeking behaviors. In general, I believe that people tend to associate the prefrontal cortex with flexible, goal-directed behaviors rather than the promotion of inflexible, maladaptive behaviors. The IfL-C – a subregion of the medial prefrontal cortex – is involved in extinction learning, in which a behavior is no longer performed once performing a behavior no longer results in receiving a reward. However, the IfL-C is also involved in maintaining habits, which are inflexible behaviors that persist even when the relationship between a behavior and the reward is changed. Therefore, the IfL-C appeared to be an interesting structure with seemingly opposing roles with respect to habitual behaviors. To look at how the IfL-C was encoding reward and contingency information, we performed electrophysiological recordings of IfL-C neural activity in mice during the performance of either goal-directed or habitual behaviors.”

"The IfL-C is one of my favorite brain structures because it is so interesting in terms of reward-seeking behaviors. In general, I believe that people tend to associate the prefrontal cortex with flexible, goal-directed behaviors rather than the promotion of inflexible, maladaptive behaviors."

How did you develop the methodology for the study?
“I already had experience in optogenetics, but Bailey Glen was spearheading work in the lab on in vivo recordings. Our collaborators, David Linsenbardt and Chris Lapish are experts in in vivo recordings of prefrontal cortex. Their contributions of expertise and data analysis, combined with the experience of my fellow investigators in the Chandler lab, changed the timeline of the project. The study really benefitted from our collective willingness to push the study forward. From conception to publication, this project took about three years.”

What were your expectations regarding the outcome of the experiments?
“I was not entirely sure what to expect. I was not sure if the IfL-C was more involved in qualitative or value information about an outcome or was more relevant to encoding information about the relationship between an action and an outcome. I started the project with an open mind and I am generally extremely optimistic. A good aspect about in vivo recordings is that they generated a lot of unbiased data. However, I did not expect such a clear divergence in outcome encoding by the IfL-C in relation to goal-directed and habitual behaviors. I was also very impressed that by using optogenetic inhibition of IfL-C following lever presses selectively during habitual behavior, sensitivity to change of outcome-action contingency was restored.”

Was there a specific turning point that changed the direction of the research?
“Yes. One particular turning point in the study arose from a Skype video meeting with our collaborators David and Chris. We were discussing a particular figure of data and Chris remarked that it looked as if the IfL-C neuronal firing was attenuated during habitual behavior (See Figure 3F in Barker et al., 2017). Later that evening, I was at the gym working out on the treadmill. It’s a bit embarrassing, but I was half-watching the movie “13 Going on 30” when my thoughts drifted to the data we discussed earlier. Suddenly it hit me…I left the gym immediately, looked at the data again and emailed my co-authors. That was the moment I realized that we needed to use optogenetics experiments as a mechanistic approach to see if the changes in neuronal firing patterns that we had observed correlated with a functional change in behavioral outcome.”

"Later that evening, I was at the gym working out on the treadmill…when my thoughts drifted to the data we discussed earlier. Suddenly it hit me…I left the gym immediately, looked at the data again and emailed my co-authors. That was the moment I realized that we needed to use optogenetics experiments as a mechanistic approach to see if the changes in neuronal firing patterns that we had observed correlated with a functional change in behavioral outcome.”

How was your experience with the eNeuro review process?
“I really enjoyed the review process at eNeuro. The option for reviewers to reveal their identity and the double-blind review process are valuable improvements in the peer review process in terms of transparency and reducing bias. I also chose to share the reviewer comments because I feel that this paper will be reviewed over and over by readers who will make their own determinations regarding the study.”

What type of feedback have you received about this study?
“People I do not know personally have tweeted about the paper, which is great. I developed friendships with people whom I met at conferences where I presented the data. I found that speaking to people in a similar field was really helpful for troubleshooting and interpreting the in vivo electrophysiology experiments. This study probably made up over 50% of my job search talk. Having the K99/R00 from NIAAA (National Institute on Alcohol Abuse and Alcoholism) opened doors for me and prepared me to talk about my future research plans in a well-defined way. The award also lent credence to my ability to lead a research project, develop an independent line of work, and accomplish the research goals.”

What is the current focus of your laboratory?
“I am interested researching further how chronic alcohol exposure affects the prefrontal cortex, and I am also interested in other neuronal substrates involved in habitual behavior, such as the ventral hippocampus. Most of the funding I have received is from NIAAA. There are currently six lab members: one post-doc, one technician, and four students pursuing master’s degrees. My previous technician moved with me from the Medical University of South Carolina, which enabled me to get the lab up and running very quickly and she is now enrolled as a graduate student at Drexel University. Everyone in my lab has been fantastic and I am really impressed with how engaged and hardworking they are. We have a weekly lab meeting for which each person is assigned a specific journal to look for interesting new papers to be discussed. We find that every week, without fail, there is a paper of interest published in eNeuro.”