Beyond the Paper: A Conversation with Dr. Laura Blair

In their eNeuro publication, Blair et al., 2019 describe cellular and behavioral defects in a transgenic mouse model in which the FKBP5 gene, which encodes the FKBP51 protein, is overexpressed in the forebrain. Increased FKBP5 gene expression has been associated with several psychiatric disorders. Many of these disorders present with dementia and other cognitive deficits, but a direct connection between these phenotypes and alterations in FKBP5 expression has not been established. Blair and colleagues found that FKBP5 overexpression had no overt effects on gross body weight, motor ability, or general anxiety. However, FKBP5-overexpressing transgenic mice exhibited impaired long-term depression (LTD) as well as spatial reversal learning and memory defects, suggesting a role for FKBP51 in glutamate receptor regulation. FKBP51 overexpression altered the association of heat-shock protein 90 (Hsp90) with AMPA receptors, which was accompanied by an accelerated rate of AMPA receptor recycling. Therefore, this chaperone system is critical in triage decisions for AMPA receptor trafficking, and imbalance of this chaperone system may manifest in impairments in cognitive function. These findings uncover an unexpected and essential mechanism for inhibitory learning and memory that is controlled by the psychiatric risk factor FKBP5. 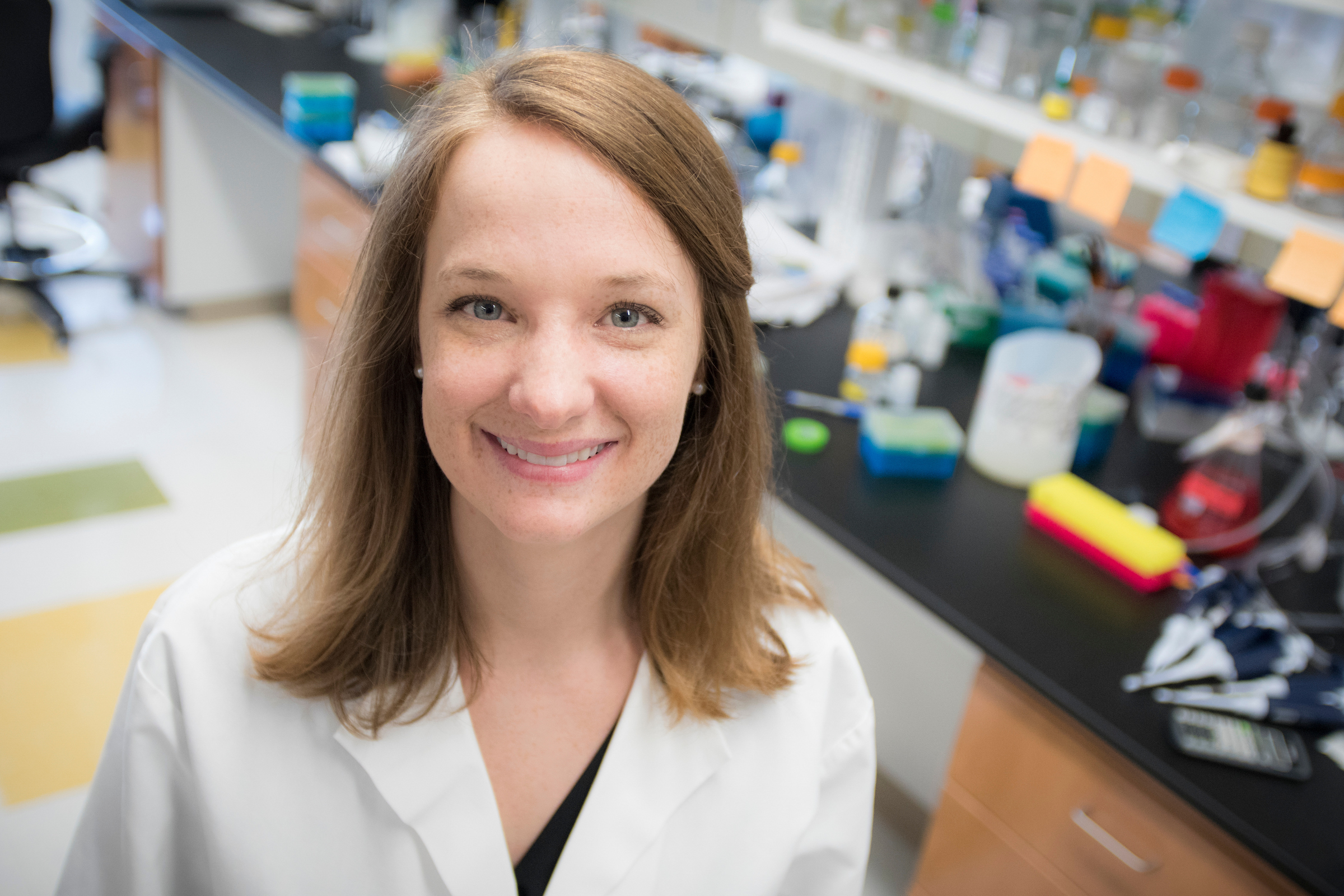 RC:  How did you become interested in this particular line of research?
LB: "I initially joined the lab of the late Professor Chad Dickey* as a technician and continued as a graduate student, then as a post-doctoral fellow. The focus of the lab was to understand the role of chaperone proteins in proteostasis and tauopathies. My research mainly focused on chaperone Hsp90 and its role in promoting tau protein aggregation. FK506-binding protein 51 (FKBP51) forms a chaperone complex with Hsp90 that prevents tau degradation, so a lot of my PhD research looked at FKBP51 in relation to Alzheimer’s disease. At the same time, there was a growing body of evidence that suggested a strong association between the FKBP5 gene and increased susceptibility to mental illness. To investigate these areas further, we wanted to generate a transgenic mouse model of FKBP5 overexpression rather than altering FKBP51 levels transiently with viral constructs. A transgenic mouse is a stable model that can be used to test drugs in the hopes of developing treatments for tauopathies and mental health disorders.”

What were your expectations regarding the outcome of the experiments?
"We expected this story to be about the effects of FKBP51 overexpression on depression and anxiety, but the only phenotype we detected was increased anhedonia, which was primarily found in female mice. The lack of an overt phenotype was initially quite discouraging, but we took the logical next step of looking for potential memory defects, as individuals with single nucleotide polymorphisms in FKBP5 have a smaller hippocampal volume. When we examined cognitive tasks and long-term depression, we saw the first robust phenotypes caused by FKBP51 overexpression. The data led us to believe that FKBP51 overexpression affected AMPA receptor recycling. We were definitely not chasing the AMPA receptor as a line of investigation as it was outside of our comfort zone at the time. However, we had to follow up on where the data took us rather than the scope we had originally envisaged for the project.”

How did you develop the methodology for the study?
“I had performed many of the experiments before. However, I did not have experience in long-term depression or receptor internalization assays in ex vivo slices. I adapted the AMPA receptor internalization assay from protocols in published papers. Most data for this eNeuro paper were collected before my mentor sadly passed away. Chad was always very open and supportive of my interests in developing these assays. He helped me find key papers on AMPA receptor regulation and coordinate a new collaboration with researchers who had expertise in electrophysiology, with whom we already had a long-standing collaboration. However, this project required several meetings with the electrophysiologists to come up with additional experiments that we did not traditionally run.”

How would you describe your research philosophy?
“Chad always prioritized doing the best experiment for the question at hand, rather than worrying about the cost of experiments or what the latest techniques were at the time. This approach is one of the most important lessons that I learned from his mentorship. Chad advised me not to be blinded by hypothesis—if the data drove us somewhere new, we should not be limited by our current skill set. Rather, we should embrace learning new experimental techniques and forming new collaborations. As an extension of my late mentor’s philosophy, I always tell my students that good data are good data. Statistical significance does not automatically mean great data—as long as the data are trustworthy, they are valuable results. So, I ask my students to show me all of the data, rather than just asterisks.”

“I always tell my students that good data are good data. Statistical significance does not automatically mean great data­­­—as long as the data are trustworthy, they are valuable results. So, I ask my students to show me all of the data, rather than just the asterisks.”

How was your experience with the eNeuro review process?
“Before submitting the paper, I did not realize that eNeuro uses a double-blind review process. But I really appreciated the double-blind review, and it may be a reason why I will choose to submit a future manuscript to eNeuro. I liked the anonymity because I believe it helps the reviewers focus and evaluate only the science presented in the manuscript. The reviewers’ comments helped to improve the paper; the suggestions were very fair and reasonable within the resubmission time frame. I also appreciate the summary by the Reviewing Editor, which made it easier to address the important points requested by the reviewers. This paper could have suited other journals, but I chose eNeuro because of the rapid review time, and I thought that the reviews would be fair. I had read several eNeuro papers and heard good feedback from others about the journal. Although eNeuro is a relatively young journal, I knew that it is reputable because of its affiliation with the Society for Neuroscience. I believe that if the science in a paper it good, it does not really matter in which journal it is published.”

“The reviewers’ comments helped to improve the paper; the suggestions were very fair and reasonable within the resubmission time frame. I also appreciate the summary by the Reviewing Editor, which made it easier to address the important points requested by the reviewers.”

Have you received any feedback from other researchers about this study?
“I have not had specific feedback about the publication because the early release version has just been published at this time. But when I presented this research overseas last fall, I felt that researchers were somewhat surprised at the unique phenotypes associated with FKBP51. Several researchers gave me some good feedback about our novel findings about AMPA receptors and the relationship of FKBP51 to spatial learning. I think FKBP51 has become a more interesting target for investigation than people had previously assumed. I hope that our eNeuro paper will stimulate more interest in the biological effects of FKBP51.”

What is the current focus of your laboratory?
“I have 12 people in the lab; we are focused on two main projects: 1) the regulation of tau by molecular chaperones, including small heat shock proteins, PPIases, and Hsp90 co-chaperones, and 2) involvement of FKBP5 gene expression in mental health disorders. The next chapter of the FKBP5 project will include looking at novel ways to target levels and to investigate other FKBP5 related phenotypes using stress or gene environment paradigms. We are examining mechanisms that control FKBP5 expression and the effects of FKBP5 on cognitive and neuronal deficits when combined with stress. Demonstration of the importance of FKBP5 in the brain's stress response and identification of new upstream regulators will lead to new insights about its role in psychopathologies and cognitive function. Also, as FKBP5 expression increases during aging, it has important implications for neurological disorders that affect individuals later in life, such as Alzheimer’s disease.”