The medial amygdala (MeA) plays an important role in innate socio-sexual behaviors, many of which display differently in males and females. For example, male rodent aggression is associated with territorial defense, whereas female aggression is maternally oriented, as is facing an intruder during lactation. Such sexually dimorphic behaviors are, of course, influenced by hormonal regulation, but are also reliant on sex differences in MeA neuron diversity and related neural circuitry. Furthermore, the MeA can be parcellated into different subnuclei, which previous studies have revealed may be activated by different innate behaviors such as mating, aggression, and predator odors—these are different across males and females. Previous genetic fate-mapping studies in mice by Professor Joshua Corbin’s lab (Children’s National Health System, Washington DC) have correlated embryonic gene expression patterns with neuronal diversity in the adult MeA. For example, progenitor cells that express the transcription factors Dbx1 and Foxp2 give rise to distinct populations of MeA inhibitory projection neurons. In addition, the Corbin lab has shown that these molecularly defined MeA populations may also respond in a sex-dependent manner to innate behavioral cues. However, how these differences extend to the important properties of neuronal firing patterns and other intrinsic biophysical properties was unknown. As demonstrated in other parts of the brain, how a neuron fires is directly related to how it transfers information to other neurons to collectively regulate the behaviors that it modulates. Thus, uncovering the link between molecular identity (i.e., neuronal lineage) and intrinsic biophysical properties is key to understanding neuronal encoding of behavior. Not surprisingly, these functional properties that enable neurons to wire and fire within a neural circuit are contextually more relevant to behavior than the expression of a particular protein. As the MeA is one of few sexually dimorphic regions in the brain, it is of fundamental importance to extensively characterize the biophysical properties of MeA neurons in both sexes. In their publication, Matos and colleagues identify biophysical and molecular properties of adult MeA neurons that vary according to sex and genetic lineage.

Dbx1Cre and Foxp2Cre mice were crossed with RosaYFP mice so that Dbx1- and Foxp2-lineage cells could be visualized by fluorescent protein reporter expression. Electrophysiological recordings were performed in live slices from sexually naïve adult mice and subsequently processed for immunofluorescence analysis. In addition to conventional analysis of electrophysiological data, the authors developed a quantitative approach to their phase plot analysis. In this manner, specific statistical parameters were applied to the neuronal activity data to increase confidence that the intrinsic firing properties of genetically labeled MeA neurons reflected true variations that could have strong functional relevance for socio-sexual behaviors. 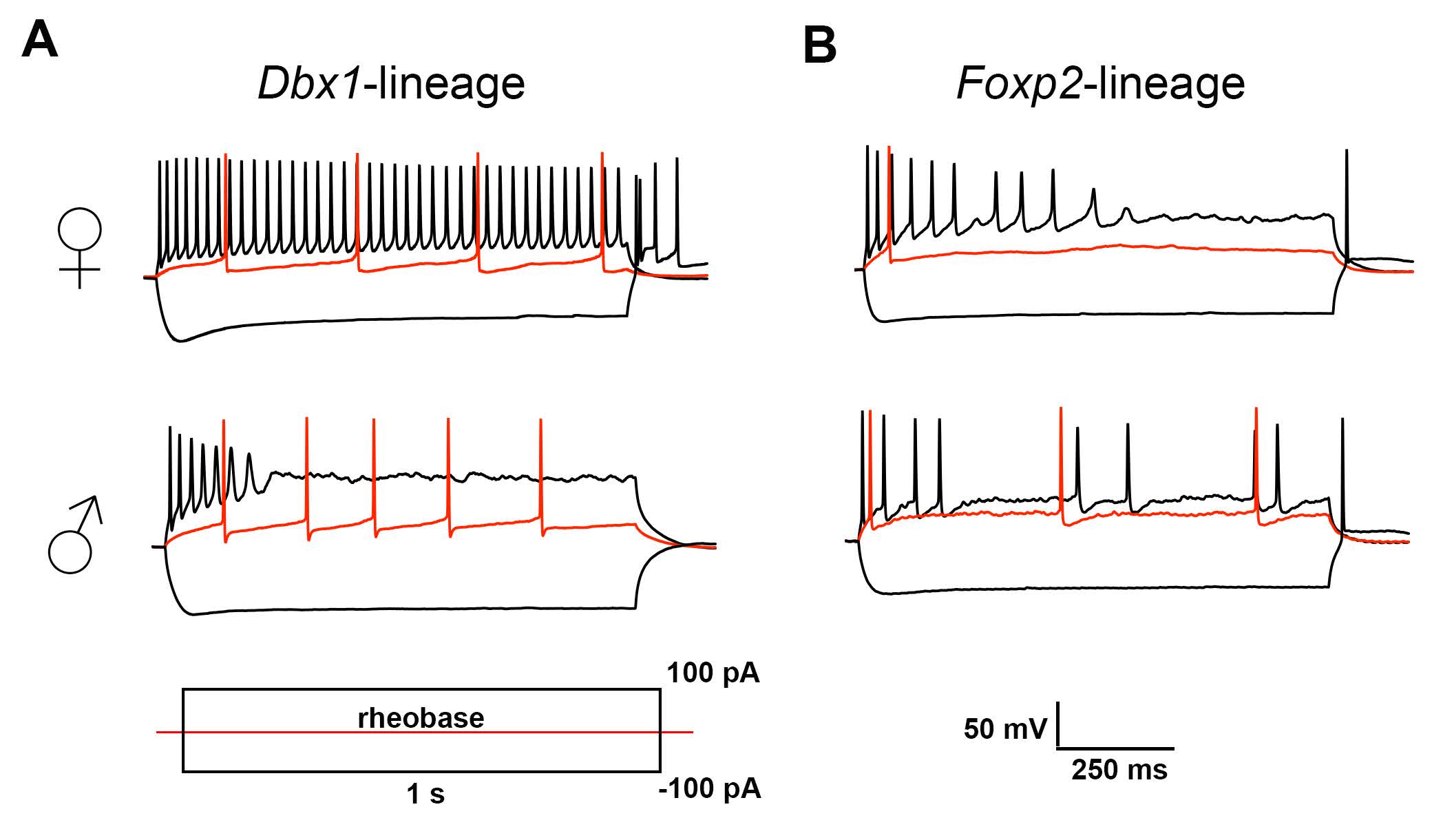 Figure 1. Spiking patterns of MeA Dbx1- and Foxp2-lineage neurons differ across sex and lineage. A, B, Representative spiking patterns of Dbx1- (A) and Foxp2- (B) lineage neurons in female and male mice. Traces show voltage responses to a 1 s injection of current at rheobase (red), -100pA, and +100pA. Line charts of evoked spike frequency versus current amplitude (C-F) *p<0.05; **p<0.001. (Adapted from Figure 1 in Matos et al., 2020.)

The authors next performed immunofluorescence analysis using antibodies that detect individual voltage-gated ion channel subtypes; candidate subtypes of interest were identified from the phase plot analysis. Figure 2 shows immunoreactivity for Slo2.2 and Cav1.2 expression in adult MeA neurons. The authors found that Dbx1- and Foxp2-lineage neurons exhibit diversity in ion channel subtype expression, where as sex-dependent differences were limited. However, Slo2.2 expression is both lineage- and sex-dependent. Figure 3 shows a schematic that summarizes the overall findings with respect to Dbx-1 and Foxp2-lineages, sex, and the expression of 11 voltage-gated ion channel subsets in neurons of the adult MeA. 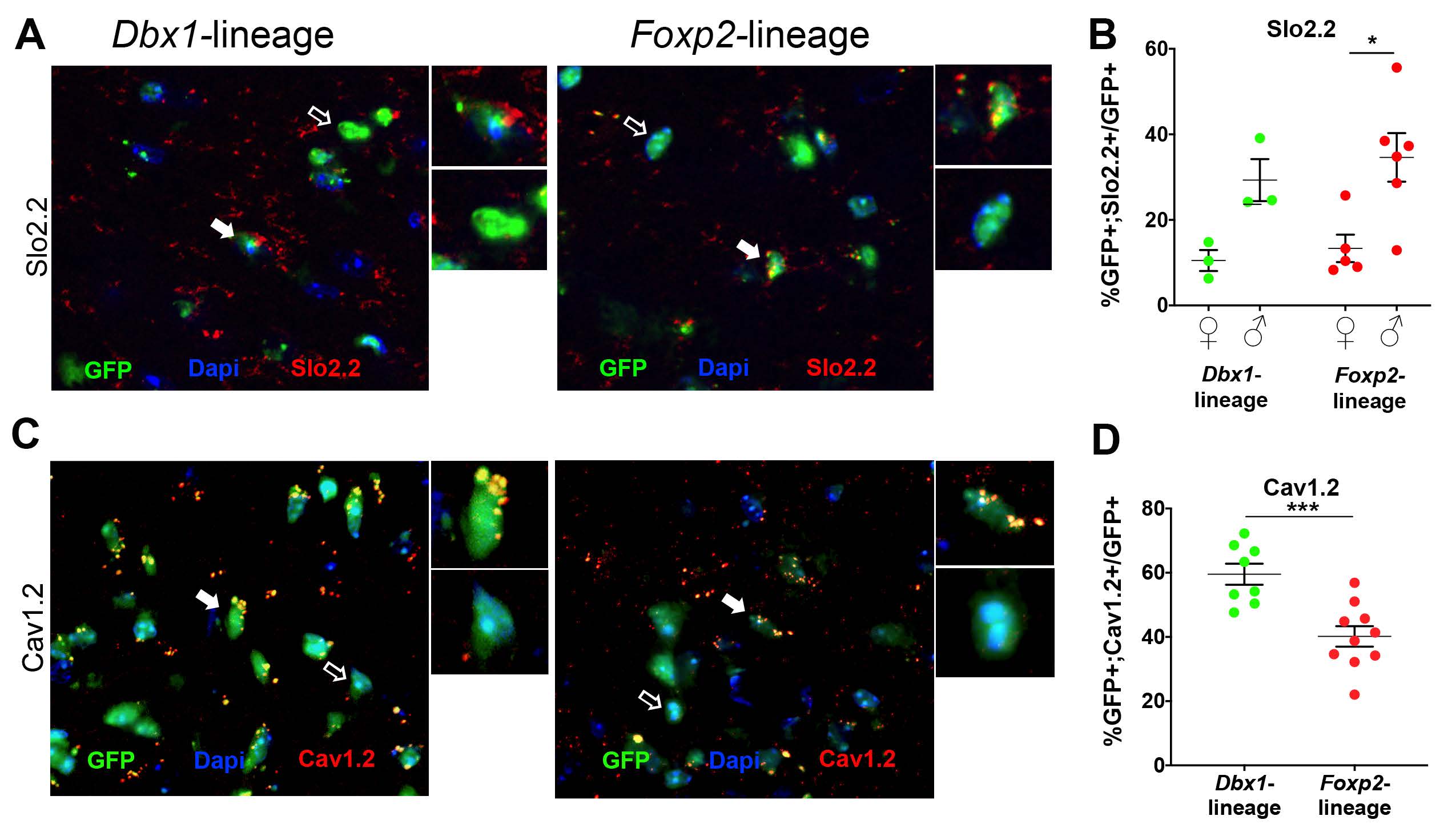 This publication is an advance in the field because the results uncover a previously unrecognized level of sex differences in biophysical and molecular profiles in the MeA. This characterization of MeA output neurons will be valuable to recognize and interpret neuronal diversity in other limbic structures with interrelated connectivity, such as the olfactory bulb and hypothalamus. Matos and colleagues provide a foundation for further electrophysiological and molecular characterization of the diverse array of other MeA neuronal populations, studies that will likely be highly informative for elucidating the neuronal substrates of socio-sexual behaviors. 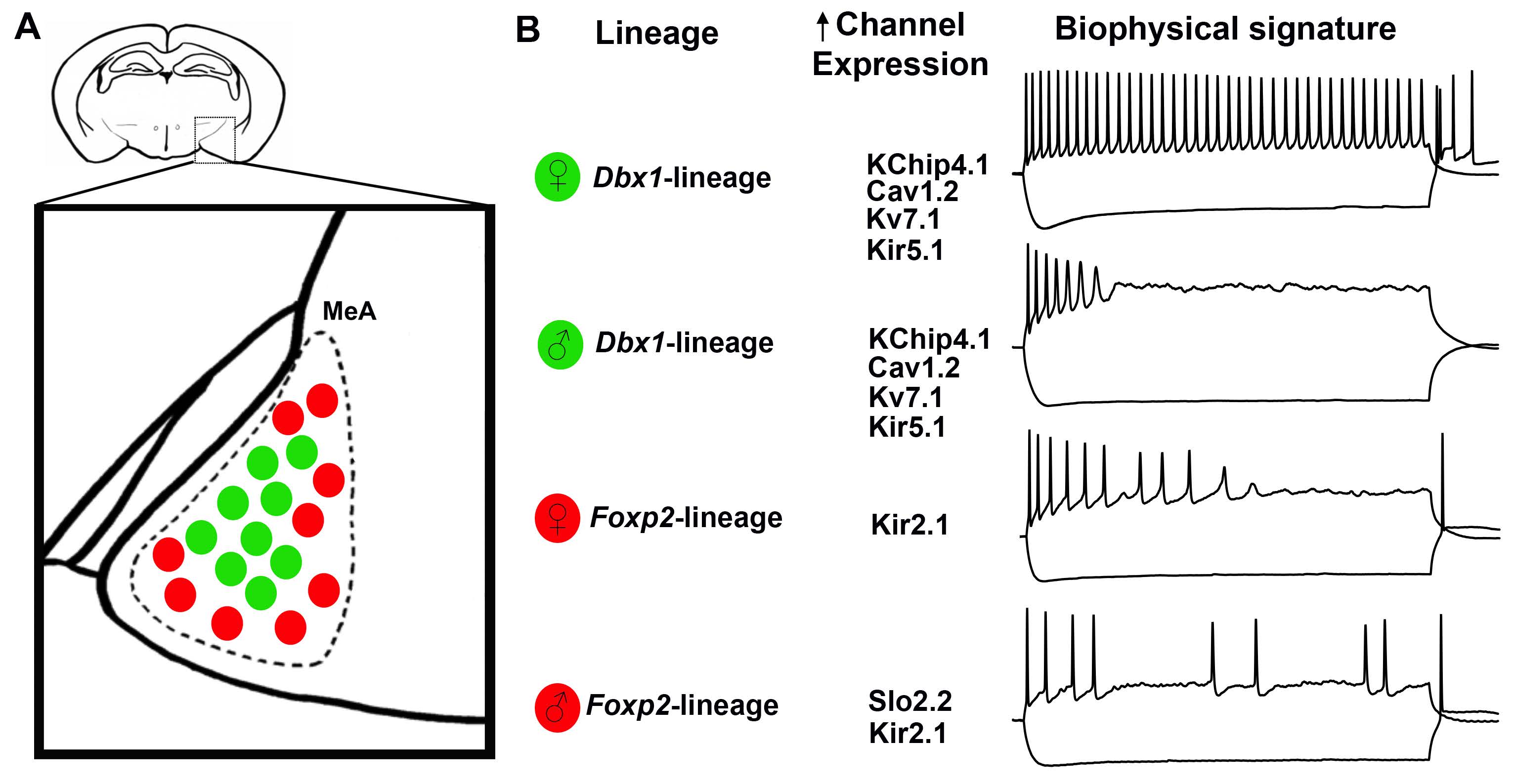 Ongoing collaborative research between the labs of Professor Corbin and Professor Kevin Jones (University of Michigan, Ann Abor, MI) examines how Dbx1- and Foxp2-lineage MeA neurons are wired together with other limbic structures in males and females. Pharmacological and genetic manipulation approaches will be used to understand how different expression patterns of voltage-gated ion channels function in concert to generate sex-specific biophysical properties and, ultimately, innate social behaviors.