Opioid overdose resulted in 128 deaths per day in the United States in 2018 (National Institute on Drug Abuse, 2020). Opioids are prescribed to alleviate pain in injured or post-surgery patients; however, their highly addictive properties and strong potential for abuse have resulted in the current opioid crisis in the United States. Opioids can act on brain regions that affect homeostatic mechanisms, including regions or structures that positively reinforce continued drug use. Opioids adversely affect the gastrointestinal tract and its microbiome, leading to altered gut motility, constipation, nausea, and other digestive disorders (Leppert, 2012; Ketwaroo et al., 2013). Following opioid use, human and rodent microbiomes exhibit an expansion and reduction in bacteria belonging to the most common phyla, Firmicutes and Bacteroidetes, respectively (Vinolo et al., 2011; Morrison and Preston, 2016).

Antibiotics are frequently co-prescribed with opioids to reduce the risk of infection following surgery. Co-prescription can lead to two major perturbations of the resident microbiota—one from antibiotic activity and another from mu-opioid receptor activation in the gut, which reduces motility and alters the composition of the resident microbiota. As interest in how the gut microbiome impacts the brain has recently increased, it was important to determine whether changes in the microbiome could affect the brain’s response during opioid intoxication and opioid withdrawal. In their publication, Simpson and colleagues examined the effects of microbiome depletion in rats on brain regions involved in opioid intoxication, opioid withdrawal, negative emotional states, cravings, stress, and pain.

Figure 1 shows a schematic of the experimental approach. Adult rats (n=22 males, n=25 females) received a non-absorbable antibiotic mixture dissolved in water or untreated water (control) for 2 weeks before opioid exposure to deplete the microbiome; this treatment continued throughout the study. Following microbiome depletion, the authors used a passive injection model (2x daily injections of oxycodone for 5 days) to induce opioid dependence in rats. On Day 6, rats were either injected with saline to induce an intoxication state or injected with the opioid antagonist naloxone to induce a withdrawal state. A separate cohort of rats, with no exposure to antibiotics or oxycodone, received 2x daily injections of saline for 5 days prior to an injection of naloxone on Day 6 to control for the effects of naloxone exposure. Collectively, the experimental groups were as follows: intoxication with no antibiotics (OXY), intoxication with antibiotics (OXY+ABX), opioid withdrawal with no antibiotics (WD), opioid withdrawal with antibiotics (WD+ABX), and saline with naloxone (SAL).

Simpson and colleagues used the von Frey pain threshold test to compare pain tolerance between the intoxication and withdrawal state groups on Day 6, two hours after oxycodone injection, or immediately following the naloxone injection. The von Frey test is a measure of mechanical nociception in which small plastic filaments are applied to the hind paw of a rat with increasing levels of stimulus. A higher von Frey score indicates that more force was required to elicit a hind paw withdrawal reflex relative to a calculated threshold. Rats in the intoxication state exhibited a higher von Frey score than rats in the withdrawal state, confirming the analgesic properties of oxycodone in the intoxicated group. The authors found that microbiome depletion did not impact the von Frey score in this model. Simpson and colleagues also examined several types of withdrawal behaviors in the rats that received naloxone, including shaking, escape attempts, abnormal posture, as well as diarrhea, salivation, and urination. Withdrawal behavior scores were higher in rats in the withdrawal state compared to rats in the intoxication state or SAL group. However, microbiome depletion had no discernible effect on withdrawal behaviors, as shown by a comparison between the WD and WD+ABX groups.

The rats were then sacrificed after behavioral testing while still in either a state of intoxication or a state of withdrawal. Coronal brain sections were processed for immunohistochemistry to detect the expression of c-Fos (Fos), an immediate early marker of neuronal activity. The authors measured quantified Fos immunoreactivity in the following brain regions: agranular insular cortex (AI), basolateral amygdala (BLA), bed nucleus of the stria terminalis (BnST), central nucleus of the amygdala (CeA), lateral habenula medial parvocellular region (HAB), locus coeruleus (LC), periaqueductal gray (PAG), and paraventricular nucleus of the thalamus (PVT). The quantification served as a measure of neuronal ensemble activity, to determine whether microbiome depletion could affect general neuronal activation during opioid intoxication or withdrawal.

Several brain regions exhibited differences in neuronal activation in a state-dependent manner, as shown by the difference in the total number of Fos+ cells when SAL, OXY, and WD groups were compared in the absence of antibiotic exposure. For example, in the BLA, more Fos+ cells were observed in the OXY group compared to the SAL and WD groups (Figure 2A-D). In contrast, the CeA showed a higher number of Fos+ cells in the WD group compared to the SAL and OXY groups (Figure 2E-H). Similar alterations of Fos expression were observed in the other examined structures that are known to play a role in the response to opioids. These findings highlight that changes in overall neuronal activity occur during opioid intoxication or opioid withdrawal in rats.

Figure 2. Quantification of Fos+ neuronal ensembles during oxycodone intoxication and withdrawal. Ensembles that were recruited during both intoxication and withdrawal were quantified by counting Fos+ neurons that were active 90 min before killing. A-C, E-G, Representative images of Fos immunoreactivity in the BLA (A-C) and CeA (E-G) are shown for saline (A,E), intoxication (B,F), and withdrawal (C,G) groups. The BLA and CeA are outlined with dashed lines. D,H, Quantification of Fos+ neurons in saline + naloxone (SAL), oxycodone + saline (OXY), and oxycodone + naloxone (WD) groups in the BLA (D) and CeA (H). ***p < 0.001, significant difference from SAL group;### p < 0.001 significant difference from OXY group. (Adapted from Figure 4 in Simpson et al., 2020.)

Fos immunoreactivity in sections from OXY+ABX and WD+ABX rats was examined to determine whether microbiome depletion affected general patterns of neuronal activation. Simpson and colleagues found that microbiome depletion did impact the brain in a regional and state-specific manner. Figure 3 shows a correlational (positive and negative) analysis of neuronal activation between anatomically connected structures. 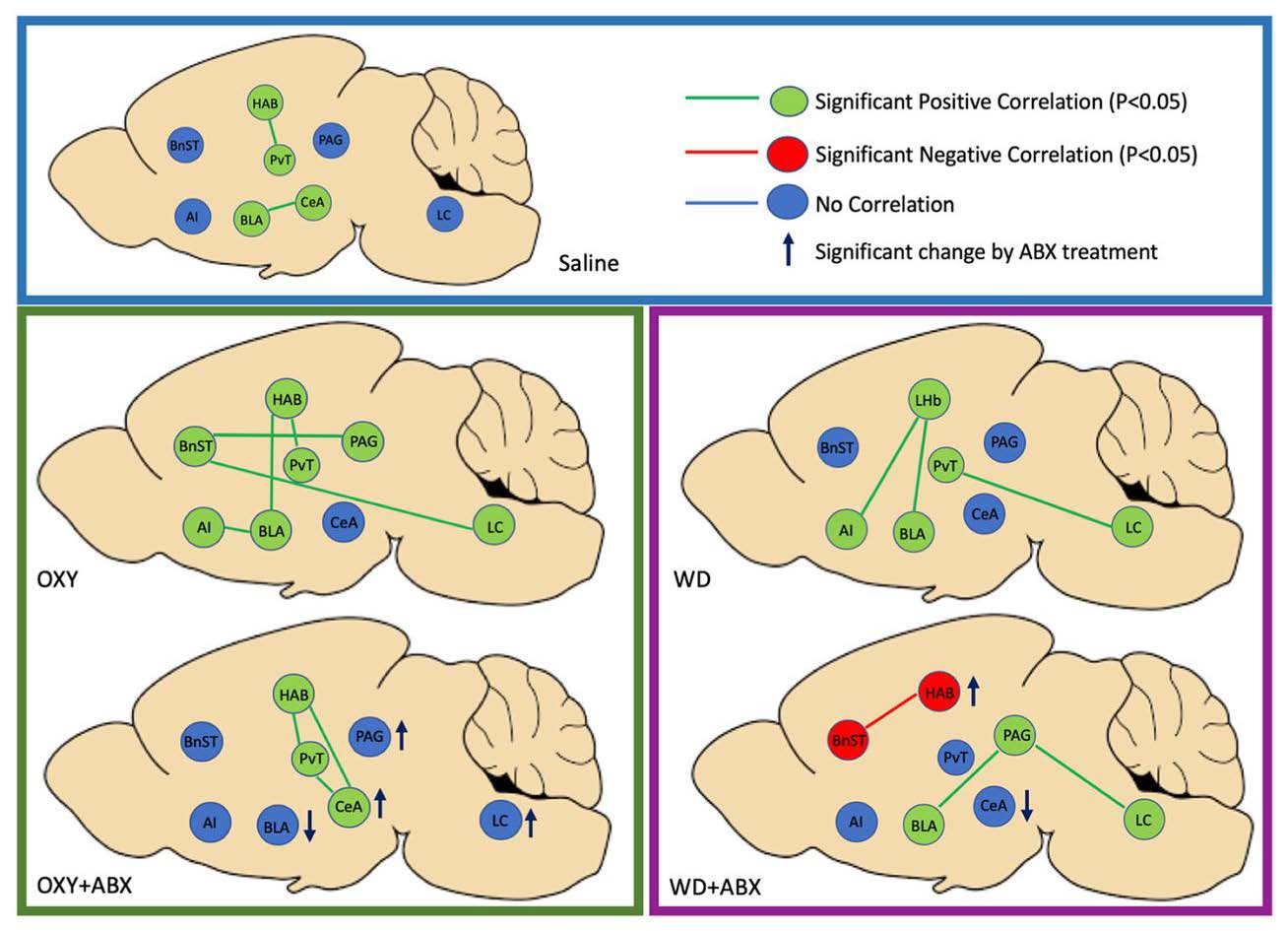 Figure 3. Correlational analysis of recruited neuronal ensembles. Depletion of the microbiome altered the recruitment of neuronal ensembles during oxycodone intoxication and withdrawal. Correlational analysis of Fos+ cells was performed between anatomically connected structures. Connections with significant correlations (p < 0.05) are represented in green (positive) and red (negative). Nonsignificant correlations are shown in blue. The regions where recruited neurons significantly increased or decreased on antibiotic depletion are marked with blue arrows to indicate the direction of change. (Adapted from Figure 7 in Simpson et al., 2020.)

The antibiotic treatment appeared to destabilize the activity of the functional networks during both intoxication and withdrawal states. The authors suggest that these findings indicate that antibiotic depletion of the microbiome alters functional connectivity patterns in a variety of brain regions during both opioid intoxication and opioid withdrawal. Interestingly, these changes occur despite no significant difference in withdrawal behaviors. The authors posit that no difference was observed in the behavioral tests because there may be a floor and/or ceiling effect in the intoxication and withdrawal states in this model. An alternative explanation is that these changes in the brain may contribute to other addiction-related behaviors that were not tested, including opioid self-administration. This publication is an advance in the field and opens many questions about how the microbiome can potentially modify neural substrates and contribute to the multi-faceted nature of addiction neuroscience.